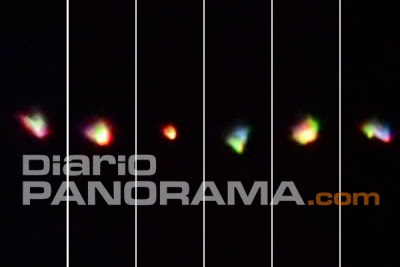 ARGENTINA. During the evening of Saturday, about 19 pm, May 2, 2012, in Santiago del Estero, the reporter from the Daily Panorama, Rodrigo Dorado, captured in the sky of the city, a strange light that revolved moving in circles, next to the moon.

The phenomenon was witnessed by numerous other people and commented on social networks in Argentina and other countries.

The object looked like a star and was moving at speed incomum. O reporter took several pictures which, when analyzed in digital zoom, revealed that the flying object is, really, not identifiable.