The Scientific name of Nibiru 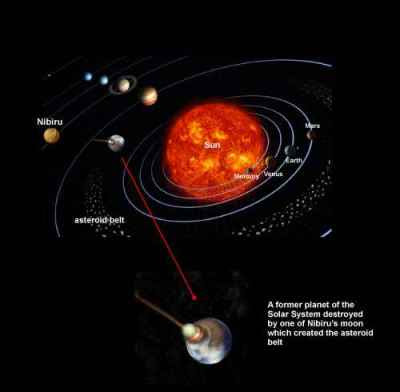 NIBIRU. The apocalyptical headlines, both on natural disasters as about unimaginable atrocities - being perpetrated by people worldwide have has made rise the collective idea of the imminence of an end of the World. Many are speculating about what might be the determining cause of final disaster. On the Internet, multiply speculations: of religious arguments even astrophysicists.

The activities of the earthly crust and the earthquakes that are happening and, that already are been considered as an "anomalous wave" by many scholars, have provoked a frenetic search to discover the origin of this facts. Amid the causes that are been cogitated - one of the most suspicious agents, is the popular and now-famous Planet X or Nibiru which has even a scientific name defined: he is the celestial body 2003-UB-313.

In east-central Turkey, an earthquake that reached 6 degrees on Richter, propagated itself - hitting the southern of Greece. In Italy, the region of Emilia Roamagna, the earth still not stopped shaking. Amid all this, dead, injured, pain, homelessness.

The scientists, especially geologists and astrophysicists are on alert. Equipment are scrutinizing the underground and the cosmic space. Eyes fixed on Earth and sky.

None of them had the astrophysical conditions that would be necessary - (frequency, speed, distance, intensity) to define their procedence as being from Planet X or any other orb outside this solar system.

However, today - none scientist, denies - completly the possibility that ...there may be something out there... Some, are hazarding make few uncertain predictions: as to say that this something can not be bigger than the Moon or Pluto. But that must to be too far, no less than 6.4 billion miles from Earth.

The astronomer / astrophysicist Gerald Neugebauer (Germany, 1932), of IRAS - says that there is no information about the constitution, size or trajectory of this something. Nobody actually knows what it is.

It is curious - and funny - the language of the scientists in their attempts cautious to not to compromise themselves. They say - if something like Nibiru is approaching, this can affect the Earth. Hell! As could to say the good and old Isaac (Newton): Matter attracts matter in the direct proportion to the masses and in the inverse proportion of the square of the distances.

(Or would be better: Something attracts something in the direct proportion to the masses and in the inverse proportion of the square of the distances. This - already is obvious and a well known nature law! Will be that the scientists think that everyone fled of the school?