The Miystery of Inga's Stone 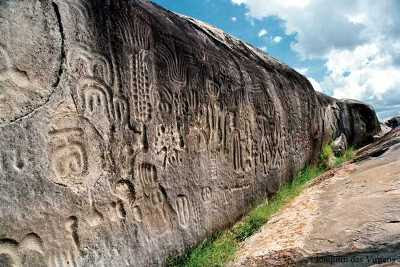 PARAIBA state. BRAZIL. At the northeast region of Brazil, distant 87 km from de Joao Pessoa, capital of the state of Paraiba, nearby the city of Ingá, in Sierra Borborema, on the banks of the river Inga, (ancient river Bacamarte) - exists a great archaelogical site. There, is found a one of the most mysterious monuments of the Humanity history. It is the Inga Stone.

The grest wall of gneiss's rock, dating of 6,000 years, with 46 meters of long by 3,8 meter of height, is covered with figures and signs which meaning is unknown by the archaeologists and anthropologists that examined them.

Some of these singns are astonishing, like a cross, a skull, a rose and a strange form that seems an aircraft. 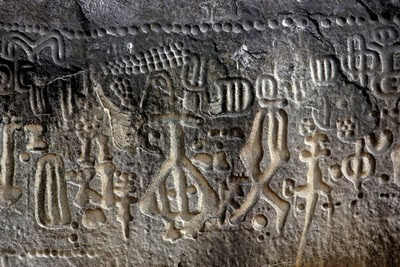 Details of the inscriptions 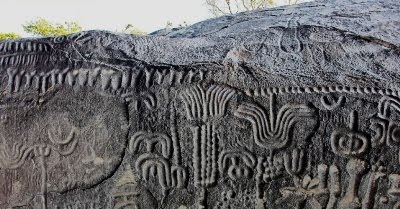 The origins of this rock engravings are controversial: some belive that they can has been made by unknown natives of the primitive South America but, the elaborated forms and their ordenation has sugested that the sequence can be a kind of document, like a hieroglyphical scripture.

By this, has been cogitated the presence, in a remote past, of ancient navigators nations that, eventualy, arrived to the continental coast and explored the lands of the region. This hipothesis, postulates the Phoenicians, for example, like being the authors of the panel. But the symbols are not phoenicians, that possessed their own alphabet.
Some signs of Inga's Stone resemble to ancient runes, the writing method of the culture of the called - northern barbarians.

No one knows how, by whom or for what motives were made the inscriptions on the rock. Various sources have been identified, and there are many who argue that the Stone of Inga has Phoenician origin. Fr Ignatius Rolim, for example, professor of Theology, Greek and Latin, who lived in the nineteenth century, was one of the first defenders and promoters of these theses, making analogies between the symbols written on the stone of Inga and characters from Phoenician writing.

The austrian researcher, Ludwig Schwennhagen, in the early twentieth century, toured various parts of the Northeast' hinterlands [of Brazil] - studying traces of the supposed presence of Phoenicians in this region. Besides numerous articles, he came to write the book "Ancient History of Brazil," not only associating the inscriptions of Inga with the Phoenicians, but also with the demotic writing of Egypt.

There is also a stream that holds that the signs of Inga were extraterrestrial engineering work. The president of the Centro Paraibano de Ufologia, Claudio Quintans, suggested that an alien spacecraft landed in the region of the Inga Stone. Another researcher, Gilvan de Brito, in the book "Viagem ao Desconhecido" ("Journey to the Unknown"), says that in the Inga's Stone exist formulas of the production of quantum energy and even mathematical including equations that might indicate the distance between the Earth and the Moon.

However, until today it was not possible to say, conclusively - who were the authors of the signs and what are and what the meaning - of the sequence of signs of the monument. Researchers connected to the branch of archeology, as DENNIS MOTA and VANDERLEY DE BRITO * - argue that the inscriptions have been made by primitive communities inhabiting the region, using stone chisels to carve the signs in the rock, about 6000 years ago. (PROUS, 2006) 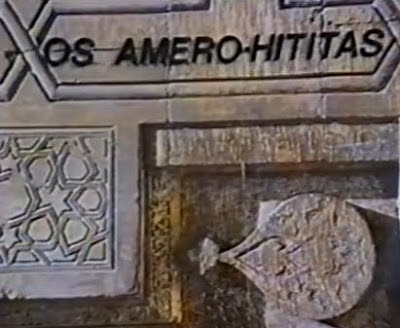 However, no reportage about the Inga's Stone can be complete without mentioning the work of independent archaeologist and scholar of ancient languages, the italian Gabriele D'Annunzio Baraldi (1938-2002).

Baraldi is, possibly, the only researcher who has reached a robust conclusion about the origin of the subscriptions in the Inga panel. Plus, he produced one - and this is the unique known - translation of the sequence using a science called Epigraphy ¹, combining methods from three experts ² in a compared study.

(1) Epigraphy (from the Greek: literally "on-writing", "inscription") is the study of inscriptions or epigraphs as writing; it is the science of identifying graphemes, clarifying their meanings, classifying their uses according to dates and cultural contexts, and drawing conclusions about the writing and the writers. Specifically excluded from epigraphy are the historical significance of an epigraph as a document and the artistic value of a literary composition. [en.wikipedia.org/wiki/Epigraphy]

Based on these studies, Baraldi, that studied the Inga's Stone since 1988, developed his theory presented in the book The American Hittites which, as the name suggests, postulates the presence of the Hittites in Brazilian lands in a historical period very remote.

The key of the translation, made ​​by Baraldi, was the identification of the Tupy-Guarany, the native language by the Brazilian natives with a language called proto-hittita. According to the researcher, the proto-hittita was spoken and written in the mythical civilization of the Atlanteans, there about 50,000 years. 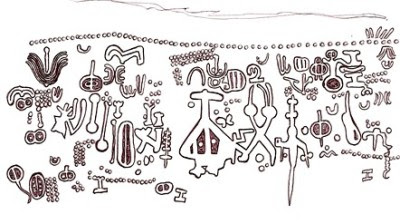 Reprudution of the a set of inscriptions of the Inga' Stone.

Many symbols of the Inga's monolith are similar to those found in Turkey, in ancient Anatolia of the Hittites. A series of inscriptions speak of a "borders war" between two sovereigns of mesopotamic origin. Another story tells about a terrible volcanic eruption. The ashes covered a stone city on the Atlantic coast, similar to what happened in Pompeii and Herculaneum. (BARALDI, 2009 - Reproduction of interview) The similarities between the characters of rongorongo, writing system of Easter Island, with the signs of the Inga Stone.

Baraldi explains that the Hittites - that inhabited in the highlands of Anatolia (now Turkey) since 2.500 BC - developed a very advanced civilization technically, but also mentally and spiritually. In his chronicles - they registered the occurrence of a catastrophe very old: annihilation of a large archipelago situated in the middle of the Atlantic ocean current.

Descendants of the inhabitants of these islands, including, Poseidonis, the seat of the Atlantis kingdom, took refuge in various parts of the world, as in Mesopotamia. However, the dispersion arrived to many other places, as the east and west coasts of South America.

The hieroglyphs of Inga's Stone that - according the researcher, can be dated between 1.374 and 1.332 BC, resemble with inscriptions found in the Canary Islands, in the Easter island (the writing system Rongo Rongo-) or in the slopes and mosaics of Heraklion (or Candia on the island of Crete) 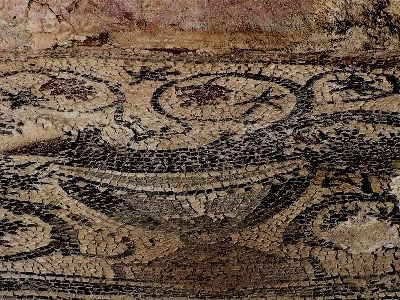 Another controversial point about inscriptions of the panel of Inga is the method used to produce them. While archaeologists Orthodox insist that in the use of chisels made ​​of stone by natives, G. Baraldi presents another hypothesis: the Hittites... dominating the use of geothermal energy, produced the hieroglyphics, using molds and mechanical pressure on layers of lava (or stone) semi melted - (in liquefied state), natural or artificially.

Baraldi based this idea on the fact that the signs of Inga are traced with precise contours - very well made​​ and they are preserved despite the ravages of time and natural forces, like the waters of the Ingá river that, periodically, rise up, submerging part of the monument. In fact, during the rainy season the great monolith is partially covered by water. (FONSECA, 2008). 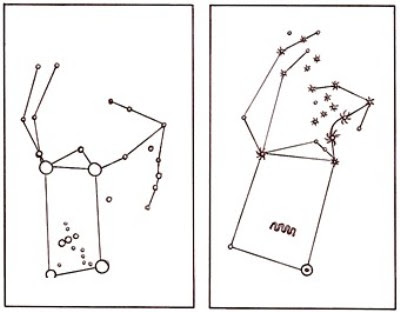 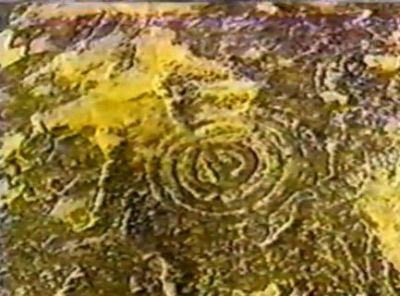 Petroglyphs in the dry river bed.

But the inscriptions are not only found in the great wall of rock. During the drought, the riverbed - dry - reveals numerous petroglyphs equally enigmatic. Among these, there are small depressions forming a group that, by its configuration, was called astronomical board. The marks are capsular points and signs that seem to be related to each other representing a constellation. Some scholars associate this set to the Orion constellation. 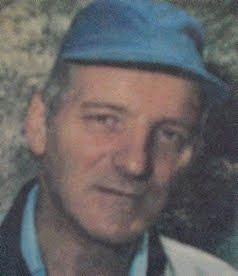 Independent researcher, interested archaeological mysteries, deepened this field of research. He studied ancient languages ​​and visited many archaeological sites in the world. Wrote two books that have become references in the study of fundamental puzzles of antiquity History of Latin America: The Discovery Doc 512 and The Hittites Americans, both published in 1997.

His work is recorded on video in a series of four episodes on YOUTUBE, (posted on 05/24/2012). Audio original in Portuguese: OS AMERO-HITITAS

To get the documentary in its entirety, DVD format - contact:
annabaraldi@brturbo.com.br
annaholst9@yahoo.com.br