Strange Winged Creature Appears on Swirl at state of Tocantins 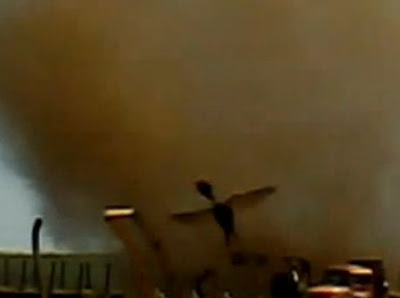 The appearance of a strange winged creature amid a strong swirl in São Bento do Tocantins - TO. On YOUTUBE, posted on 19/09/2012. [http://youtu.be/6fuUviTi-Xg].

According to the tradition of Brazilian folklore, swirls are produced by sacis, the charmed being with one-legged, promoter romps more or less malign pranks.

It is not the case: the "entity" that appears in this whirlwind beyond biped has wings and there is no known version of winged sacis...

Possible cogitations that it could be a bird caught by the whirlwind can be disregarded due to the size and shape of the head of this being.

TOCANTINS. This news was not published in any midia. In São Bento do Tocantins, small town in the state of Tocantins, a citizen, Renato Lemes Rabelo, filmed a whirlwind. Swirls of major proportions occur frequently, in this region (brazilian west center), this time of year.

The head of the National Institute of Meteorology in Goias, (Tocantins state neighbor), Elizabeth Alves Ferreira, told the G1 news channel, in another reportage on swirls* - that this is a normal phenomenon in this time of drought when the rains come close:

The news of the G1 channel, talks about a giant whirlpool, 35-feet tall, approximately that occurred in the city of Quirinópolis (state of Goias), on Monday, September 24th (2012) and that was recorded on video by a citizen, Renato Lemes Rabelo. 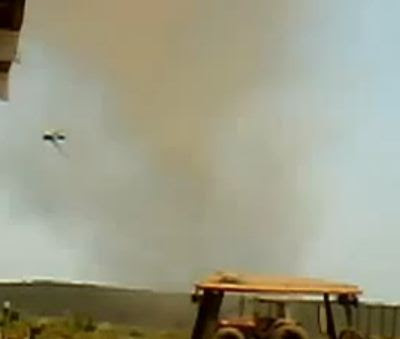 At 42 seconds of video of São Bento do Tocantins: another image, very quickly, shows a flying "object" on the left of the screen.

It happens that, searching for the video of the citizen of Goiás, on Youtube, the editor of this blog found a swirl much more curious. Besides being a violent spiral of dust, in this video, at 30 seconds of the 48 of the sequence, in a fleeting moment, on the screen, appears a strange winged creature that disappears quickly amid the turbulences of the wind.

The video, with few visitations - as is very common on the internet, has no additional clarification beyond the date of posting. His author, also is not identified, uses only a nickname: ricardo500ful. Probably many will say that the pictures are a trick but... maybe not be.

At 42 seconds, when the swirl is dissipating, another image, very quickly, shows an "object" flying to the left of the screen. It would be part of the "trick", perhaps ... The same object or creature appears again before the end of the video. Let's meditate ...

THIS NEWS IN PORTUGUESE
[http://sofadasala-noticias.blogspot.com.br/2012/09/estranha-criatura-aparece-em-redemoinho.html]