Machu Picchu - The Small and Mysterious Grave of the Mountain 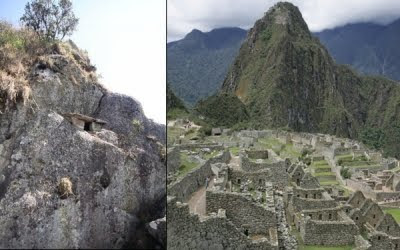 The tomb on the hill. Mysterious: small and isolated.

PERU. A strange tomb was found on the hill Uñawaynapicchu in the Archaeological Park of Machu Pichu - on Monday, 03/09/2012. Unlike other funerary constructions of the pre-Columbian civilizations of Peru, this grave is located on the top of a rocky hill, about 10 meters below the summit of the elevation, in front of the big wall of Machu Pichu. Small - measures only 1.20 meters long and has 75 cm wide.

The park director Fernando Astete told Andina news Agency: It is unique because all the graves of Machu Pichu, such as those found by Hiram Bingham (north-american explorer and treasure hunter, 1875-1956), are caves that had been closed with stones of different sizes - stacked and covered with mud - which served as the cement of these constructions.

Researchers have realized that this strange sepulture was desecrated but on the spot were found bones and pottery shards. Next to the tomb, were rescued pieces of stone that belonged to it, what allowed to restore the original appearance of the crypt.

Archaeologists and historians have no idea who was buried there but they believe that was a character distinct or at least unusual, given the location difficult to reach and the size remarkably reduced of this mysterious burial chamber.