🕎 📚 JAH-HOVAH, THE HERMAPHRODITE GOD OF JEWS 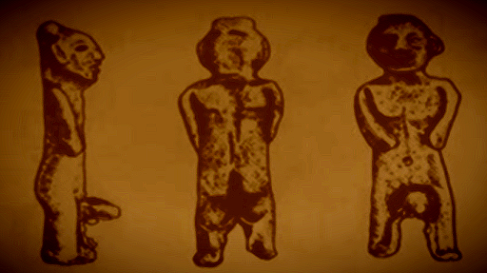 Idol made of copper (cuprum) dated from the year of 1200 BC. This is obviously a phallic deity. It was found in the sanctuary of Timna, in el Kuntillet Ajrud, Israel, in 800 AD. Supposely it is a primitive representation of Yahweh [Jah-Hovah] and this statue is famous for his phallus, indicative of their prodigious reproductive capacity.
[Beno Rothenberg, et al. The Egyptian Mining Temple at Timna. Institute for Archeo-Metallurgical Studies Institute of Archaeology, University College London. 1988]
Jah-hovah was a hermaphrodite. For many, the information may seem strange or even shocking but it is the truth that emerges from the study of the mythology of "God of Israel". It is a title just because Jahovah was indeed the specific God of that ancient nation. Or, better said, a tribal god.
The primitive religion of the tribes that left Mesopotamia following patriarch Abraham was not a monotheism [never was and still isn't] founded on the belief in a universal God, God the Creator of all things, all beings, God of all men.
Jah-Hova was [and resists recycled into "exotic" doctrines today] - the God of Abraham's followers, the patriarch [head of a clan] who, as far as is known, was original from the city of Ur, in Chaldea, that is, from Mesopotamia, the region where Babylon  was located, nowadays Iraq.
The name of the people - Jew - derives from the ancient name, Yah-oudi, applied to them and, in the begining - a name that was, for them, considered offensive! Yah-oudi can be understood as "Jeovitas"  (Jeovites, Yah-ouvits, Jahouvists), "Jha-evoadianos" (Yah-oudians, Jahouvidians), "Jodhadious" or simply, followers of Jah-hovah.
The name Jah-Hovah is the simplification from original word, that in hebrew (hebraic), is a composed word - Jah-hovah: JAH or JOD or - even - YOD, that means phallus, penis, male: "The Hebrew letter Jod membrum represented the virile" [BLAVATSKY, 2003].
Hovah means vessel (container, receptacle), cavity, a shell - (like a marine shell, a conch). It is female (and, later, it gained another synonimous, the word "vagina", from Latin - that means sheath. Thus, It is a metaphor related to the fact or gestual of the warriors of keeping or put his sword in the sheath or in vagina, (a case, a holster). 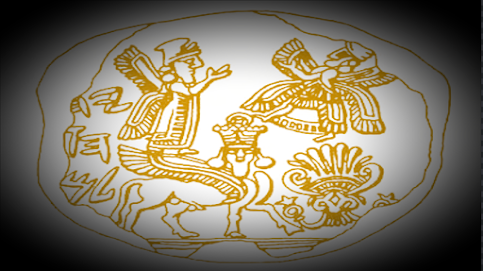 The illustration is recognized by many scholars as Yahweh on a Winged Cherubim accompanied by a goddess, also winged, Asherah, hovering over the "sacred tree". Note the phallus, well-defined Jeovah.
FONTE: University Fribourg, Switzerland. Vandenhoeck & Ruprecht, Gottingen. 1999.
So Jehovah means "male-female", "penis-vagina", a being that combines attributes genitals of both sexes, a hermaphrodite.
The Judaism still primitive and popular Judaism of King David is regarded as a phallic religion because the hallmark of his divinity, Jehovah, are signs of sexuality, the act of generation.
The Jewish Ark of the Covenant (other people ou cultures also posses their "arks") has a sexual symbolism noted by several scholars:
"The two cherubs placed in front of the vault [the ark], have the wings positioned so that form a perfect yoni.[female genitalia]"." (BLAVATSKY, 2003).
Hargrave Jennings, in his work "Phallicism", writes: "We know from the Jewish annals that the Ark contained a stone tablet, and it can be demonstrated that this stone was phallic".
For the contemporaries - devotees or invokers of Jah! would be good know that this word has never been synonymous of "God"  - the Almight, the Creator of the universe or any other word with which is called the God of contemporary monotheism, Christian or not.
"To the Hebrew esotericism ... the main function of Jahovah was to give children [BLAVATSKY, 2003] (sons, daugthers, descendents) ...
* This text is the result of a research on the topic based on the theosophical writings of Helena Petrovna Blavatsky.
There is at least one apocryphal book - the Book of Yashar - that narrates the saga of Abraham in another way, attributing to him, since his youth, specific knowledge about the unicity God, acquired directly from one of the last survivors of the Flood of who was a descendant and by whom it was educated: Sem - son of Noah.
SOURCES CONSULTED
BLAVATSKY, Helena Petrovna. A Doutrina Secreta vol. II  — Antropogênese. São Paulo: Pensamento, 2003.
________________________  A Doutrina Secreta vol. IV — O Simbolismo Arcaico das Religiões, do Mundo e da Ciência. São Paulo: Pensamento, 2003.
ILUSTRAÇÕES: BIBLE ORIGINS
Postado por SOFA DA SALA REVISTA às 4:31 AM No comments:

EASTER ISLAND IN THEOSOPHY
The relation with Lemurians and Atlanteans 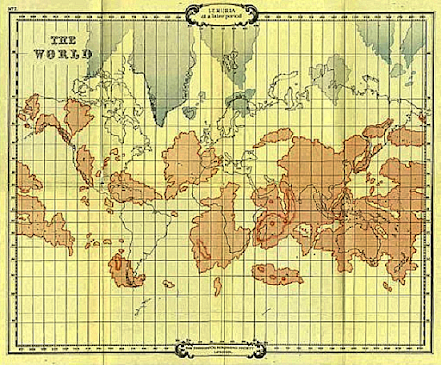 On the map, in orange color, the lands of the Lemurian continent. Much of Africa, southern Europe and Asia, South America and North America, this lands - they did not existed. The Easter Island is in the Pacific Ocean where - today - the territory of these waters belongs to Chile.
The Easter Island is a small part of an ancient continent that, today - is underwater: the land of Lemuria. That means those lands belonged to Lemuria. Lemuria was submerged but re-emerged, not once but several times. The Easter Island, one of the highest points of the Lemurian continent, is among the first places to "get out of water" when the ocean levels suffer change - to down.
The ethnic groups that inhabited the island were representatives of the Atlanteans, Fourth Human Race. "The Easter Island is a remnant of Lemuria ... belong [geologically] the beginning of civilization of the Third Race [while the statues belong - anthropologically and historically, to the Atlanteans of Fourth Race]." Amid the revolutions of the earth's crust, land masses, often disappear into the sea for arise again, in another Era. The Easter Island "... emerged intact with its volcano and its statues ..." (BLAVATSKY, 2001)
In The Countries of the World, Robert Brown writes: "Teapi, Rapa Nui or Easter Island is an isolated point distant to nearly two thousand miles from the coast of South America ... It is about twelve miles long by four wide. At its center .. exists an volcanic extinct crater that has 1,050 feet in height. The island is covered with these craters, so long extinct that there is none tradition remembering something of the epoch of they were actives".
To Theosophists, the statues of the island represent real men. They belonged to an extinct men race - considerably more portly than these of nowadays. They were the giants who carved the statues known like Moais. 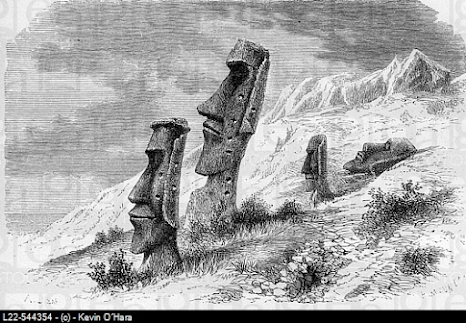 Ronororaka. Inside Volcano. South Eastern side. Drawing of A. De Bar from sketches of Mr. Alphonse Pinart. Easter Island, Chile.
Image Code: Photographer: Kevin O´Hara. Collection: age fotostock.
Rights Managed
[http://www.agefotostock.com/en/Stock-Images/Rights-Managed/L22-544354]
The relics of Easter Island are the most eloquent and astonishing memories of the early giants. They are as imposing as mysterious and just look at the heads of the colossal statues ... for recognize the characteristics and appearance attributed to the Fourth Race giants. Seem all made by the same mold, even they had different faces ...they have a kind clearly sensual, like the Atlanteans (the Daityas and Atlanteans) of the esoteric books of the Hindus.
The statues of Ronororaka (above) are four: three are deeply buried in the ground and one is resting, on the shoulders, like a man asleep. Their types differ, although all have a long head and clear pictures that represent "portraits", by the noses, mouths and chins, that vary greatly. The head covering - a kind of boring hat, with an additional piece to protect the neck - proof that the originals were not savages of the Stone Age.  [BLAVATSKY, A Doutrina Secreta vol III. Antropogênese.
São Paulo: Pensamento, 2001 p 241/242].

The coast of Chile, as it is today, and the Easter Island in the South Pacific. 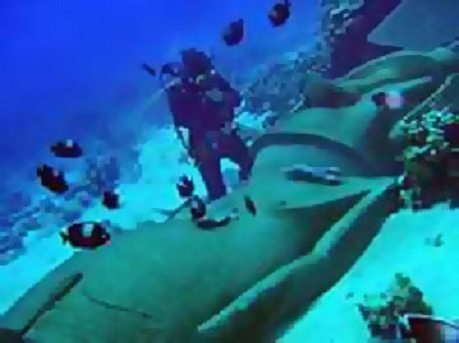 Moai submerged off the coast of Easter Island. The diving to observe the statues is a tourist attraction. The diving to observe the statues is a tourist attraction. On Easter Sunday, the fifth day of April 1722, the Dutch captain Jacob Hoggeveen, landed on the island. It was the first unknown face that the 6,000 inhabitants of the island saw. Some decades later the population was only 111 survivors ... The unique town of the island, Hanga Roa, is a charming village full of flowers, dogs, horses, their owners and some tourists ... IN BRASIL MERGULHO, 2006.
"One of those great cities of primitive structure, was all built of lava some thirty miles from the site where Easter Island now stretches its narrow strip of barren soil; a city that a series of eruptions destroyed completely. The most ancient remains of cyclopean buildings are the work of the last subraces Lemurians." (IDEM).
"One of the earliest legends of India, preserved in the temples by oral and written tradition holds that there are several hundred thousand years, there was in the Pacific Ocean, an immense continent which was destroyed by geological convulsions and whose fragments can be seen in Madagascar, Ceylon, Sumatra, Java, Borneo and the main islands of Polynesia ....
A religious belief, common from Malacca to Polynesia, is that, between these two extreme points of the Oceania, says that all the islands that exist in this region nowadays, formed - in remote times, two huge countries [that reunited Atlantic lands and Polynesian lands] ... the ocean ... flooded the two continents ... only the peaks of mountains and the more tall plateaus escaped the deluge ...
In with regard to the Polynesian continent, which disappeared at the time of the great geological cataclysms, its existence is based on evidence such that, within the logic, can not be doubted.
The three most high points of the continent, Sandwich Islands, New Zealand and Easter Island are separated by a distance of 1,500 and a 1.800 leagues, and groups of intermediate islands, Viti (Fidji), Samoa, Tonga , Fortuna, Ouvea, the Marquesas, Tahiti, Pumuta, the Gambier Islands, distant from those extreme points around 700, 800 or 1,000 leagues.
All mariners are unanimous in saying that the groups of the extremes and central groups could not communicate with each other by virtue of its geographical position and by the insufficient resources at their disposal. It is physically impossible to implement similar distances in a pirogue ... without a compass, and more - to be able to travel for months without enough provisions.
On the other hand, the aborigines of the Sandwich Islands, of Viti, New Zealand, the core groups of Samoa, Tahiti etc., don't had knowledge nor never had heard one of other before the Europeans arrived. However, each of these people stated that their island was once part of a vast area of ​​land extending itself westward toward Asia.
Confronting individuals of all these nations or tribes, was noted that they were speaking the same language, had the same customs and had adopted the same religious belief. And, face to the question: Where is the cradle of your race? - All of them, in response, pointed the hand in direction to the setting sun".