RUSSIA. KRASNODAR CITY. The video was made on the night between 30 and 31 May 2015. The luminous sphere in the sky could be the Moon but that night there was no full moon in Krasnodar. It was the moon crescent, not visible in the footage. The next full moon at that local should  appear on June 2. 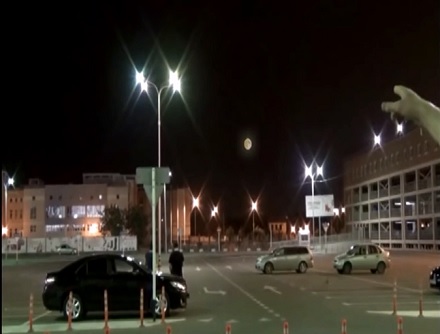 But even that the bright orb could delude someone for a few minutes, the idea of a full moon would soon be discarded when the object began to move slowly, moving away from the earth, diminishing in size until suddenly, in a quickly movement, in  high speed, disappeared in the sky in a fraction of second.

The headlines that reported this sighting - note the reference below - insisted on highlighting the hypothesis that ... the moon is a spaceship piloted by aliens ... or ... Video proof that the moon is a giant alien spacecraft.  Although the possibility exists, in fact - this is not the case.

The midia that refer to UFO Krasnodar like a proof of the artificiality of the moon on that particular night, they know, very well - that the orb never could be confused with the Moon at the appropriate stage.

The headlines mention theory of the moon-spacecraft for ...mere sensationalism. It is not enough be an UFO, it has be an UFO disguised of Moon.