The Lost City of Bahia 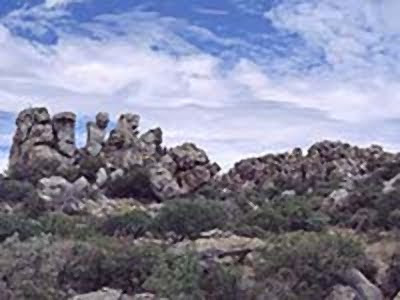 In the Livraria Pública da Corte, actual Biblioteca Nacional, at the city of Rio de Janeiro [Public Library of the Real Court, actual National Library], in 1839, an ancient and manuscript was found by the naturalist Manuel Ferreira Lagos. The title of the document was Relação historica de uma occulta, e grande povoação antiquissima sem moradores (Historic relations of a hidden much ancient, great city and without residents). In the catalogo, it is the 512 number document.
The story begins when the expeditionaries found a very brilliant montain. Glow of cristals. The men were admired with the landscape, but they could not climb the rock formation. A man, trying to reach a white deer (albino, perhaps), found a trail, a road built at the inner of the mountain. Through there, the expedition followed its way. From the top of the mountain they saw a great village, it was a city, in true. It was empty, without residents. Apparently, there was nobody there.
The stone way was the unique access to the city. At the entrance there were three big arcs. In the middle stood the largest arch flanked by two other, smaller. On the largest arc there was a inscription. However, the signs, were being illegible and for this, they could not be copied or identified. The houses were well made and symmetric. Seeming like a only one construction, were, in true numerous individual buildings.
Exploring the interior of the housings, the expedition found no furniture or any other object. At the end of the street, there was a square. There, existed a huge black coluna on whose top there was the statue of a man. The man had his left hand on the hip while his right arm stood pointed to the North Pole. In each corner of the square had an obelisc in ancient roman style. On the main portic of the street also there was a figure made of the same stone naked from the waist up wearing a crown of laurels and a shield with inscriptions. READ MORE
Postado por SOFA DA SALA REVISTA às 5:50 PM