The Mystery of the Astronomy of the Mayans 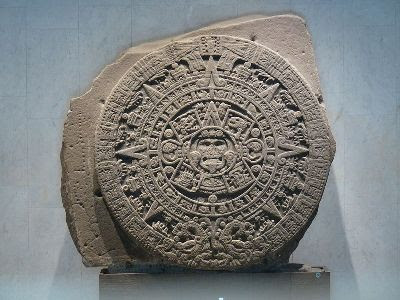 The image above is the what which has been, currently associated, in websites, blogs and newspapers - with the Mayan calendar. But this is not the Mayan calendar. This is The Sun Stone, the AZTEC Calendar also called Mexica or Stone of the Five Eras or, even Haab a name that, yes, belongs to one of the mayas calendars.

The Sun Stone is exposed at the National Museum of Anthropology, Mexico City - Mexico and - in fact, possesses points of congruence with the chronology of the Haab, one of the Mayan calendars, the Cuenta Larga or the "Long Count of Mesoamerica".

It was found during excavations in Le Zocalo, the main square of Mexico City, on December 17, 1790. It has a diameter of 3.7 meters and weighs about 24 tons.

The truly Mayan Calendar is not recorded in a single block of stone or parchment of any kind. But is scattered in various monuments, numerous, petroglyphs and rock paintings distributed in a wide area of Central America, especially at Guatemala.

MAYAS/COSMO. Wednesday, September 19, 2012. At sunset, the astronomical phenomenon of alignment between the Moon and Mars, produced an eclipse of the called - "Red planet" - which was occulted by the silver disc of the lunar crescent. The eclipse occurred at around 18:05, time Brazil. Just over an hour later, at 19:22 Mars reappeared. 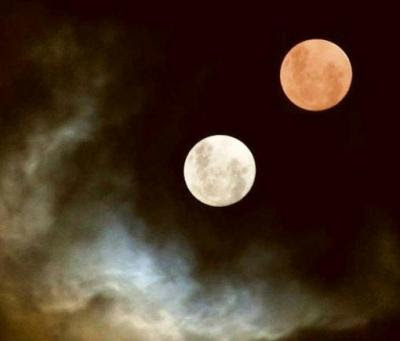 Graphical representation of the astrological alignment between Moon and Mars on September 19, 2012.

The event draws attention not only for its rarity of occurrence but because this is one of the cosmic phenomena most highlighted in the Mayan calendar, the same that has been rumored in this year (2012) for its alleged prophecy of the End of a Time in December 21 next.

The scholars consider that this alignment is one of the most important events of the calendar before the end of an era anticipated by Mayans in their predictions.

The knowledge about the culture of the Maya - and other pre-Columbian nations - is very scarce. This is due to the religious fanaticism of the Spanish colonizers (thus like the Portugueses, in Brazil). They understood that was essential to destroy the native knowledge that they considered like contraries to biblical texts, like demonic things, pagan heresies

Interestingly, the little that has been preserved, is due to the zeal of some of these same religious - most enlightened - that kept parts of this knowledge practicing the smuggling of these documents to Europe.

The Popol Vuh (or po'pol wu' in K'iche modernized), for example, a record of Mayan culture that includes "myths" like the Anthropogenesis, was produced in the sixteenth century, and officially dated in 1544. It is a record made ​​with the Latin alphabet but written in K'iche language.

Much of the original text, compiled language K'iche and, in parallel, translated for Spanish language, in the town of Santo Tomás Chichicastenango (also known as Santo Tomás Chuilá - Guatemala), by the Dominican priest Francisco Jiménez (1666-1729), in 1714 - was lost and the remainder is in the Newberry Library, Chicago - USA.

The Mayan calendar, as far as is known, dates from the fifth century BC (500 BC according to academics). In fact, the calendar is a set of three chronological tables that inteargem each other, each one using uma contagem based in different astronomical references. They are:

TZOLZIN, with 260 days, called "the order of days" was and still is used (for native communities in the highlands of Guatemala) to marks earthly events based on sacred cycles, driven by the movements of the sun, moon, the planet Venus and the star Sirius.

HAAB, the solar calendar - a civic calendar, with 365 days.

CUENTA LARGA or Calendar of the Long Periods - which records the time since August 11 of the year 3114 BC, when synchronized with the Gregorian calendar (current, Western). It happens that this calendar, which marks the Ages since the begin of the Creation, records four "worlds", or Four Humanities - (the current is the fourth).

The stone "pages"  of the Cuenta Larga have been found in different archaeological sites scattered in Central America, what turns your study even more difficult. This - the Cuenta Larga - is that the Mayan calendar predicts the end of a world that will occur in December 2012.

One of these "pages" or stelas of the Cuenta Larga - which are lithic monuments - the so-called Stela D, which is part of the archeological monuments of Quiriguá, Guatemala - contains a cosmogonic record that goes back to a bygone age estimated at 400 million years. How is this possible? It's a mystery.

For example of this mystery science, according with the Popol Vuh, mentioned in the Anthropogenesis of The Secret Doctrine of H. P. Blavatsky (portuguese edition):

The first men were a race whose field of vision no had limits and they had the immediate knowledge of all things, manifesting, in this way - a divine capacity of knowledge, similar to the gods...
(BLAVATSKY. A Doutrina Secreta. Antropogênese, p 111. São Paulo: Pensamento, 2001) 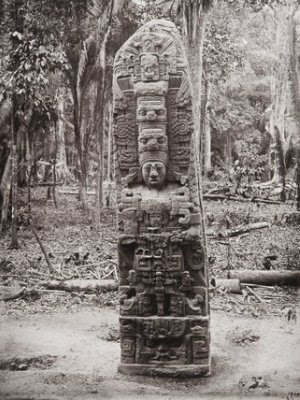 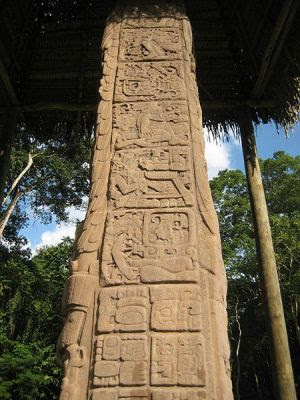 North Face of Estela D or monument 4 - part of the Mayan calendar "Cuenta Larga", In Quiriguá - Guatemala. The researchers postulate based in recent studies, that the Stela D can be dated in the year of 766 AD. The Stela D has about 6 feet tall.
Photo: Alfred Percival Maudslay, 1983.
[http://www.prmprints.com/image/816207/stone-carving-stela-d-at-maya-site-of-quirigua-guatemala].

The stone pages of the Cuenta Larga (the Mesoamerica Long Count calendar) have been found in different archaeological sites of Central America, what turns its study even more difficult. All the three calendars were inherited from cultures more ancient further increasing the mystery of the origin of the pre-Columbian peoples.

It is curious to note the banality with, currently, people and the media speak of the Mayan Calendar that, in truth, thus as many mysterious legacies of great realizations of the peoples of antiquity are simply something of unexplained.

The accuracy of astronomical knowledge, not only of the Mayans, but also of the Mesopotamians, Egyptians, Chinese, Greeks, of the Dogon, a simple tribe from Republic of Mali - West Africa among many other nations, is an enigma that has been neglected by academic science that usually attribute this knowledge to the mere systematic observation with the naked eye, of the night sky by priests and shamans.

This idea is absurd and even naive. At the same time, the same erudite and ofical science solemn despises the traditions of those cultures whose traditions - all of them - considered as mere myths or fantasies, relate their advanced knowledge with the presence, in ancient epochs of divine Masters that would have been responsible for the instruction of their ancestors, not only in relation to the stars and planets as well, to a whole set of techniques, from agriculture to metallurgy that consist in the fundamentals of a civilized humanity.

THIS NEWS IN PORTUGUESE
[http://sofadasala-noticias.blogspot.com.br/2012/09/o-misterio-da-astronomia-dos-maias.html]