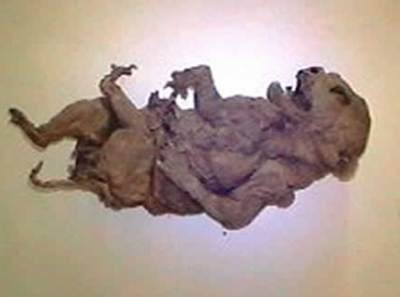 MEXICO. In a farm near the of town of Camargo (Santa Rosalia de Camargo), in the Maizales street of the colony Infonavit Cuatro Milpas, a couple of garbage collectors recilável found the mummified body of a strange being. Small, approximately 10 cm of long - the creature has an elongated head, arms, legs - apparently suitable for to move in water and a kind of appendage that appears to be a tail .

The mummy was more or less exposed, among the trash. The president of the group ESRA UFO research, Miguel de la Torre said that his group has the register of finding of three similar creatures. Despite the bizarre appearance, the specimen has a structure clearly humanoid.

Now, the strange Being was packed and and put in an adequate place to avoid their deterioration until it can be submitted to laboratory analysis. Meanwhile, after that the news was published, there are rumors among the local population that the bizarre creature can be an offspring or, perhaps, a Chupacabras fetus (goat sucker).