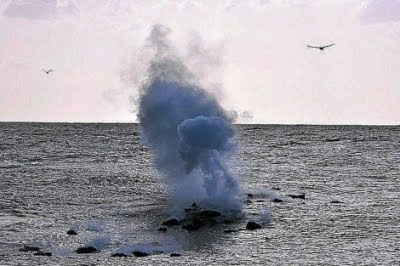 CANARIAS ISLANDS. The magma pressure detected in the Canary island of El Hierro has caused in the past four days on the island deformation of four to five inches vertically and horizontally three to four, as reported Thursday (28/06/2012) by the General Directorate of Security Canary Islands Government.

The energy released has reached 420,000 million joules, a fact which, together with the ground deformation, evidences the magmatic process acceleration on the Canary Island.

The largest earthquake, with magnitude of 4.0 on the Richter scale, occurred at 18:55 hours Wednesday in Mar de las Calmas, 2 km from the coast and 20 km deep.

The seismic activity began in the sea of the Gulf (north of El Hierro) and then was propagated to the center of the island, coinciding with the point of intersection of the grooves and then - migrated to the west. At the noon of June 25, the seismicity was concentrated in an area that includes the west and the dorsal side of the El Julan, and at noon, on June 27 the focus of the earthquake begins to migrate towards to the Mar de las Calmas.

According to the esoteric geology, the Canary Islands are one of the few portions of land that remained above the sea level after the major part of the territory, that housed the mythical civilization of the Atlanteans disappearing completely, submerging in the depths of the Atlantic Ocean.