Ophio... The "Zombiezating" Killer Fungus (that turns insects in Zombies) 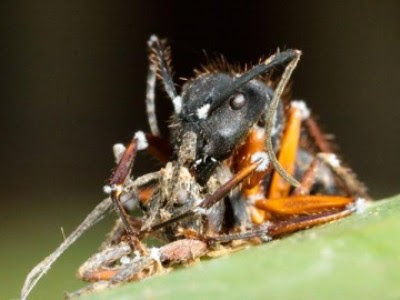 An ant possessed by the killer fungus. IMAGE: National Geographic.

ANIMAL WORLD. A macabre fungus is transforming some species of ants in real zombies whose final destination is death.

The fungus, whose scientific name is Ophiocordodyceps, after entering into the victim's body, begins acting affecting the central nervous system, causing an abnormal behavior in the insects.

Slowly it grows, spreads occupying other parts of the body even reach the brain of the individual (the ant). At this point in the process of possession, the agent begins to neutralize the vitality of muscles and fibers, to control the mind; to kill.

The head of the infected falls over its neck. The ant is dying but, for some reason that scientists can not explain, the ultimate death happens, only in certain hour of the day: by midday.

After kill its host, the fungus killer emerges from the brain, evading through the orifices of the animal, full of spores, that are its seeds - ready to infect other ants.

Although it has been detected more frequently in ants, the Ophiocordodyceps (summarizing, the Ophio ...) or - the killer fungus, as it is being called, it also attacks bees, flies and crickets.

The Ophio ... the zombie factor of the animal world, is the perfect matrix for the development of a variant that could be used in humans which, incidentally, also belong to the animal world... And, NO. This editor is not suggesting nothing!