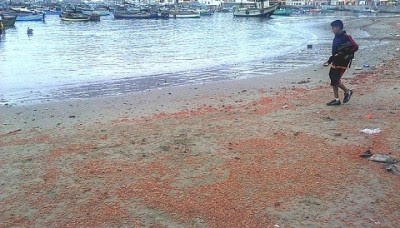 WORLD. The most recent and significant case is ongoing: dolphins, pelicans and other seabirds and, more recently, crustaceans, continue (May / June, 2012) to appear dead in large numbers on the beaches of Peru.

In its explanations to the midia, the scientific community offers little more than speculation, assumptions, which non-confirmation, after the time that the experts have had to investigate, becomes very suspicious occurrences. Rumors about the causes of the ecological disaster spread and even non-human aliens have already been held accountable.

In its explanations to the midia, the scientific community offers little more than speculation,assumptions and the non-confirmation, after the time that the experts have had to investigate, turns more suspicious the occurrences. Rumors about the causes of the ecological disaster are numerous and, even aliens non-humans, already are being blamed.
held accountable

However, this kind of animal mortalities are in headlines there are at least two years. There is not how denies that the phenomenon has assumed global dimensions.

Among the informations circulating in newspapers, alternative magazines and blogs - and even in prestigious publications by their tradition of service for decades, a hypothesis has been, each time more pointed as the cause of these deaths: unknown and secret activities of an institution that exists shrouded in mystery: HAARP (which officially is the High Frequency Active Auroral Research Program).

HAARP, a long name for a badly explained facility, officially funded by the Air Force and Navy North American with the assistance of the Alaska University, because this Research Center is located in the state of Alaska. 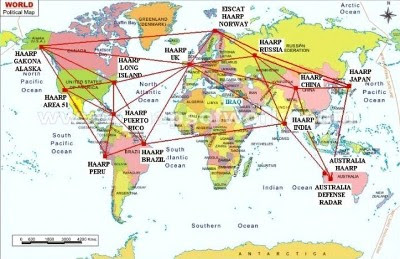 The HAARP, which is a network of 180 antennas, began to be mounted in 1993. But today, the facilities of HAARP are not limited to Alaska. At Worldwide, there are centers of the HAARP, includ Brazil and Peru.

This structure causes controversy even before its installation. Many scientists, environmentalists and peace activists - claim, or worse - denounce that the HAARP hides a war purpose with the use of very advanced technologies. Some say that this network of antennas is a geophysical weapon. This hypothesis was supported, for example, by russian president, Vladimir Putin, in 2002.

Earlier, in 1999, European Parliament declared that the HAARP is a device able to manipulate the environment in terms of climate and geology. Wasbeen manifested, still - the fear of this manipulation come to be used in humans.

While animals are still dying en masse and government spokesmen offer only promises of analyzes, negative laboratory results and hypotheses, such as heating water, but without compromising with statements, newspapers such as El Tiempo - Colombia, as publish headlines like this explicit, for example: El animales MARINOS HAARP continues to kill.

While animals are still dying en masse and governments spokesmen offer only promises of analyzes, negative laboratory results and hypotheses, such as the heating of waters but without compromise with the true, newspapers such as El Tiempo - Colombia, are publishing explicit headlines like this, for example: HAARP continues to kill marine animals.