The astonishing technologies of the Bosnia pyramids 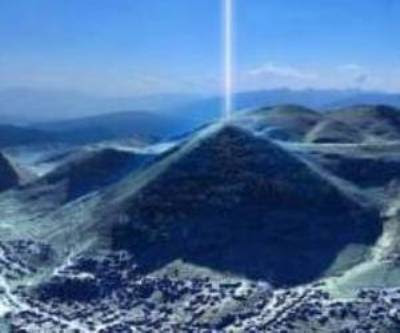 Pyramid of the Sun, Bosnia.
The mysterious emission of a energy beam.

BOSNIA. The pyramids of Bosnia were discovered in 2005 by anthropologist of the American University in Bosnia-Herzegovina, Dr.sci. Semir Sam Osmanagich.

Curious formations near the town of Visoko, 20 km northwest of the capital, Sarajevo, the pyramids were perceived by the researcher while he was observing two hills that had too regular format.

Triangular with the angles of your quadrilateral base oriented to the cardinal points, they were in fact two pyramids hidden by vegetation. Were called Pyramids of the Sun and Moon.

They were the first pyramids discovered in Europe, confirming the fact that these constructions exist in all the world. Excavations carried out until 2011 revealed other three pyramids, that was called pyramids of the Dragon, of Mother Earth and of Love. Thus arose the Bosnian Valley of Pyramids which also houses a complex of tombs, many ceramic sculptures and a huge underground labyrinth with more than 10 km long.

These astonishing pyramids of Bosnia - today, are recognized as the edifications of this type more ancient and largest - in the entire planet. The Pyramid of the Sun, with its 220 meters high, exceeds the Great Pyramid of Egypt, which measures 147 meters (height).

Its orientation to the North is accurate with an error of 0 degrees, 0 minutes and 12 seconds. Its antiquity goes beyond 12,000 years old. Its rectangular concrete blocks have unique properties confirmed by scientific institutions of Bosnia, but also from France and Italy: extreme hardness and low water absorption (about 1%), much higher durability than the similar material of nowadays.

The pave of terrace of the pyramid of the moon, according to an analysis conducted by the Institute of Physics and Technology of Silesia, Poland - using the radiocarbon method, has been dated at 10.500 years.


MACHINE AND SALOON OF THERAPY 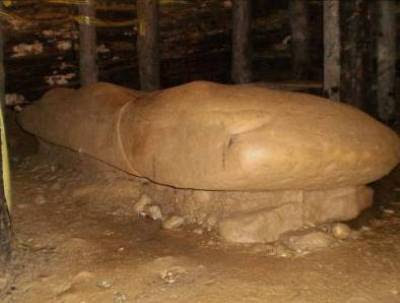 K-2, sculpture of ceramic. Found in the underground labyrinth
of the Valley of the Pyramids of Bosnia. Structure therapeutic.


The Bosnian Pyramid of the Sun keeps his mysterious functions in activity. A team of physicists has detected an energy beam that protrudes through the top of the pyramid. The radius of the beam (which, therefore, is circular) is 4.5 meters and its frequency is 28kHz.

The beam is continuous in its direction, up, and its intensity increases as it gains height, ie, moving away from the pyramid. The phenomenon contradicts the known laws of physics and technology. Everything indicates that the pyramid builders of the Sun of Bosnia, they created a perpetual motion machine, and this energy machine is working.

There are three underground chambers where it is located a small blue lake. This enviroment has a level of ionization that is 43 times major than the average concentration of normal in similar environments. It means that these cameras are true "healing rooms".

In 2011, was discovered through detection that the electromagnetism inside the tunnel is equal to zero. There, doesn't exist radiation or radioactivity in relevant technical levels of earthly or cosmic origin.

The ceramic sculptures found there are not merely decorative. They are positioned on the flows of water and amid them of a mode that convert negative energy into positive. They are, therefore, not an art gallery but rather converters of energy polarities.

All this makes the underground maze be, amazingly, a one of the most safer and healthiest places in the world, capable of bringing about the regeneration and rejuvenation of the body.

The interdisciplinary research that investigating the pyramids discovered in Bosnia, in six years, produced results that never were achieved in two centuries of research on the pyramids of Egypt. They are revelations about the physical, and spiritual energy of these enigmatic structures: the pyramids. These discoveries, without precedents, are revolutionizing completely the Science of the Pyramids.