Afghanistan: The mysterious Faintings of Girls 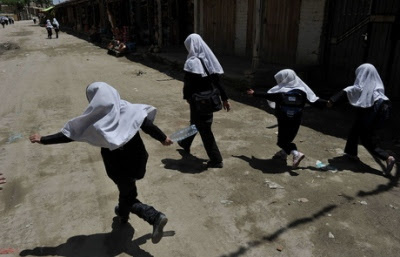 AFGHANISTAN. In recent weeks, hundreds of girls have suffered fainting or dizziness at least, during the period of the day in which they are at school. In the last of these incidents, that occurred in a school situated in Takhar province, north of the country, 80 students, between 8 and 18 years, fainted or felt unwell.

The authorities, who have not yet know the cause of the phenomenon, present controversial versions. The spokeswoman for the Interior Ministry, Sediq Seddiqi attributed the problem to ... a toxic gas expelled through an aerosol ... that could be being used, intentionally, criminally, in the classrooms. Other government sources, however, provide other informations.

The spokesman of Takhar province, for example, Mustafa Rasuli, speculates that the cause of incidents is contaminated water but also raised the idea that can be occuring a psychological effect: ...with the divulgation of the first cases, the mental pressure has multiplied the occurrences.

Another hypothesis speculates that Islamic militants, the Taliban movement's radical Muslims are behind the mystery. However, representatives of the rebels published messages denying any involvement with the faintings.

The denial did not convinced the agent of Human Rights Watch (HRW) in Afghanistan, Haether Barr, which highlights the fact that the fundamentalists continue to oppose the education of women. In 2011, the Taliban openly attacked girls' schools.

According to Barr: Half of Afghan girls and young women still not are attending school. Last month five similar cases occurred in different schools. About the psychological element argued by some authorities, Barr said that this only reflects the atmosphere of fear still surrounding the girls and their families.

By request of the Afghan government, NATO's mission has carried out several laboratory tests. The spokesman, Jimmie Cummings, said that in the material collected for testing, from students in Khost, there were no traces of poisonous or toxic organic compounds. He added: It seems unlikely that any such substance be the cause of the symptoms described.

Two weeks ago, a hundred girls fell ill. The most serious episode happened two weeks ago, when hundreds of children at a school in the eastern province of Khost got sick or fainted. The authorities considered the case as poisoning. Thus, the mistery continues.