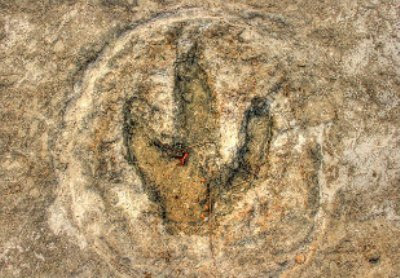 AFRICA. A great mystery is haunting tropical forests of Africa. Local hunters reported seeing a group of animals - that are being called monsters - devouring elephants and crocodiles.

These animals, that already have been seen by more than ten hunters are appearing more frequently since the month of December 2011, and were identified like the mythical creature known like Mokele-mbebe (which means "one who stops the flow of rivers" in the Lingala language).

According to the testimonies of those who have seen the creature, he looks a lot like a dinosaur - having a long body, tall, with about 11 meters high, a single horn and grayish brown color. Everything indicates that the these great animals live in the forests, in caves near Congo river.

At those place some archaeologists and biologists spotted a large number of mammoth bones and remains of animals such as elephants and crocodiles.But until now, no hunter or specialist managed to shoot the animal, but only the footprints he left near the caves. Each footprint has around 90 cm of diameter.

Roy Mackal, retired biologist from the University of Chicago there are many years, has dedicated his time to hunt these mysterious creatures in the forests of Congo.

He has seek the monsters since 1980 but never managed to sighting them, like occur with the natives. It's like a hunt for the Loch Ness monster. It gives a feeling that we are still living in the Prehistoric Era, he says.

Mackal said that, all those who have seen the Mokele-Mbebe, they stood shocked. We were navigating the river when we saw Mokele-mbebe. He started chasing us and left the river, Like a woman, a native that said to the scientist: We came out running or the creature could kill us.

Some experts say that many africans confuse the appearances of the animal with legend and spiritual myths, but the creature seems to even be real, since their footprints have been found.

To Mackal, who spends his days searching for new species in Africa, the existence of the Mokele-mbebe is a true. I do believe that this animal still exists and lives in the forests of Africa. Currently, he said, there are more than 50 expeditions all over the region in search of evidences of the existence of this animal or, even, em search of an encounter with it . I would be very proud of discovering the Mokele-mbebe to 86 years old, I live for this.