Benjamin Solari, The Artist-Prophet Abducted & The Terrible Prophecy For 2012 Olympics 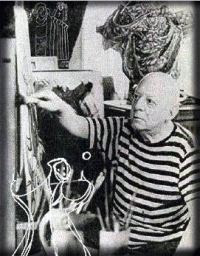 ARGENTINA & UK.  The Argentine artist Benjamin Solari Parravicini (1898-1974), throughout his life, amassed two remarkable vocations: painting and the gift of prophecy. Often, he reunites the two abilities, writing texts in the same pages of his the prophetic drawings.

His name gained notoriety through the internet because of its mystical predictions about events that, when held, impacted public opinion. The most significant examples are: the attack on the Twin Towers in 2001, yhe Tsunami in Japan followed by radiation leak from the Fukushima Plant, and, in his country, the two presidencies of Cristina Kirchner in Argentina.

Now, is circulating on the web, a video with an analysis of a psychographic that the artist drawn in 1972. According to the interpreters, the central theme is the 2012 Olympics, which will be held in London in July this year. The text says: 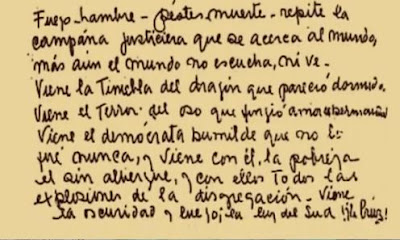 Fire, famine, pestilence, death and justice are echoing in the world and the justice is coming to the world, especially to the world that does not listen and do not see. The darkness of the dragon seemed sleeping is approaching.

The terror will come from the "oso" (bear) that was disguised as love and brotherhood. Will come the humble Democrat who never been and with it comes poverty, the homeless, the lack of a refuge and all the explosions of lawlessness. Do not delay - will come the darkness, (and soon) then - will come the light, after the raising of the Southern and the Cross. 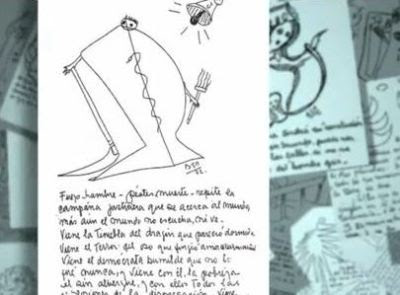 But the relationship with the Olympics is not in the text, but in the drawing. Ali, a hidden figure wearing a long tunic seems to hold a torch (which resembles the Olympic torch) under a bell. The bell has been identified as the bell of 17 tons that the organization of the games announced that will use in the opening ceremony of the event. 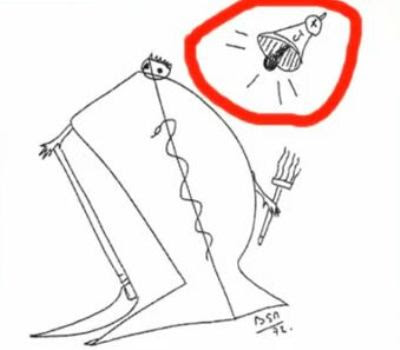 The design also contains the representation of a coiled serpent, which is being related to the tower, called Olympic Orbic, design of the architect Anish Kapoor to be one of the symbols of the games. The central figure of the drawing of Parravecini has a form identical to the perimeter of the Olympic Park where the games will be realized.

The dragon has been understood as a reference to China and the humble democrat, has been associated with President Barak Obama whose place of birth, shrouded in controversy and obscurity, is speculated as being, in true, the Kenia, Africa, which lies to the south in its geographic relation with the United States and Europe.

But the "South" can also:

1. be a reference to the southern United States, which has a past marked by the struggles of the slave for the freedom in American history involving the secret society of slaverers and Arianists, the Ku Kux-Clan. The Ku Kux Klan (or its ideology) can also be associated with the "dragon that seemed to be asleep" (instead of China) since it has, as one of its symbols, a variation of the swastika and a pattern uniform that consists of a white robe.

2. be a reference to the Arab countries or people and / or Muslim communities, also located in their countries situated south of Europe and in which the typical chotes are tunics.

3. be a reference to members of the Catholic Church or Christians in general, the robe and the hairs, tonsured, seem to resemble a figure of a Western monk. 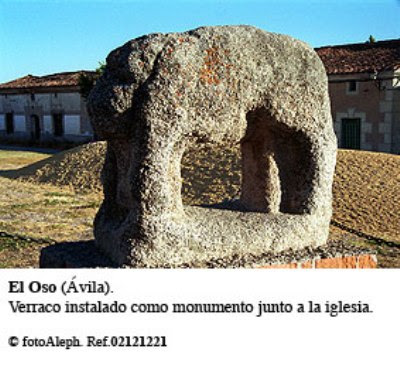 Finally - the cross, the robe and the sickle, symbol of death, which appears in the drawing, these symbols may, for all these associations, be an indication of possible danger related to ethnic conflict, xenophobia and religious confrontations.

And even - traditionally, el oso, in the western vocabulary of prophecies, means bear, that the western interpreters generally understand as a symbol of Russia.

However not can rule out other meanings of the word. OSO also refers to a location of Washington, where is located the Jim Creek Naval Radio Station, which is a facility of the U.S. Navy.

EL OSO is also a town in Spain, located in Avila, whose name is due to a granite sculpture that stands in the doorway of the local parish church and represents, for some, a bear, for others a boar (which leads it to a symbol of Germany). It's an antique. is about 1.250 years old and their provenance is unknown.

Backing to Benjamin,the prophet, he also would had reportedly been abducted by aliens. The ufologist, parapsychologist and historian Fabio Zerpa, argentine historian (b. 1928) wrote a book about it. Title: Benjamin Solari Parravicini, the Nostradamus of America. According Zerpa, the artist, himself, told about the episode that happened when he was at the center of Buenos Aires, sitting on a bench Avenue July 9.

So two people arrived near of him. They were strangers. Their eyes were whitish. Suddenly a great light enveloped them and he found himself transported to a circular room where there were illuminated panels and a tubular structure.

Ali, Benjamin received a telepathic message. One of the aliens told him: You must spread the love. The Universe is harmony. His conduct is aggressive. We have many elected and we'll meet again. Thereafter, the artist found himself, again on the bench. Three hours had passed.