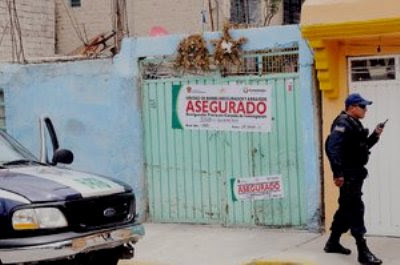 MEXICO. It happened in San Agustin Atlapulco (city of the metropolitan area of Mexico City, the capital of the country), in the colony of Nezahualcóyotl founded 25 years ago by immigrants from Oxaca, Puebla and Guerrero.

In a house, located on a street in the neighborhood Graciano Sanchez, in Monday (5/21/2012), a group of ten people, including four children, were fasting and "praying" waiting for the end of the world.

They believed in the supposed imminence of a devastating earthquake, that would go happen in 28th day (this month) at 1 o'clock pm. An earthquake able to exterminate all life on Earth. Pretended religious authorities were leading the cult. A satanic cult.

The candles were lit. Among the instructions that were determined everyone should pray with eyes closed. But a child, Ferdinand - stood tired of mantain his eyes closed. And opened them. (And, it seems, he was not alone).

His mother, identified as Carmen, 23, perceived the disobedience (means that she also was with her eyes opened) and ordered sternly: Close your eyes! The boy refused: I will not close. Then she sentenced that eyes of the boy would be gouged out.

And were. With an aid of one of her sisters, this mother pulled the child's eyes with her own hands. A teenager of 17 years (identified as Maciel), uncle of Ferdinand, and his girlfriend, Ruth, horrified by what was happening, the two ran out of the house screaming: They are killing my nephew! They are plucking his eyes!

The neighbors heard the screams. A man called the police. Some people invaded the residence to rescue the boy. They found him in the arms of mother. She was hysterical with the child in her arms, bloody and unconscious. Inside the house, there was no religious images.

But in front of the house, on top of the gate, there is hanging a pentagram, a symbol that the ignorant, like these fanatics, believe be a an element of evocations of black magic.

The prosecutor, Jesus Acevedo Isaac Romano, who initiated the investigation, confirmed the presence of the ten persons and identified the children - which have between 9 months, 8, 5 and 17 years of age. The mother of Ferdinand, Carmen, and the aunt of the boy, Lizbeth, were indicted along with the others members of the sect.

The woman, Carmen, when was questioned, in the police station, was calm. Not asked by his son and not showed none remorse. The neighbors, that stood horrified. They said that the persons of the neighbor family, during more of twenty years, they appeared to be normals.

Isaac Romano also said that preliminary investigation found that the family really belongs to a cult and, about the reason for the mutilation of the child, the fanatics claimed that it was necessary ...to avoid end of the world. Only four of the eight prisoners were brought to testify. The others were in psychotic state, being submited to psychiatric and psychological avaliations.