Object in Flames at Peru Sky

PERU. A luminous object crossed the sky of Arequipa (southern Peru) at 5:30 pm moving from east to west. The population and scientists have different opinions: a meteorite, an optical illusion caused by an aircraft, an UFO. 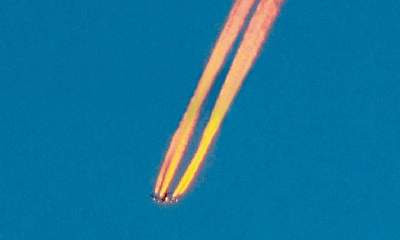 The phenomenon, clearly observed in Ciudad Blanca and in the provinces of Castilla and Camana, was recorded in videos posted by netizens on social networks.

The director of the Geophysical Institute of the National Univercidad San Martin, in Arequipa, Jose Diaz Rodriguez, discarded the hypotesis of object be a meteorite.

According to Rodríguez, the fall of a meteorite would have caused a strong impact, an earthquake, something that could be perceived, heard, what did not happen. We also found no crater or damage to the soil in the region where, presumably, the object would have fallen.

The scientist believes that what happened could be the result of an optical effect caused by the passage of a plane in the sunset light and remembered that, not far from the place of the sighting is situated a base the Peruvian Air Force (FAP). The video images show two traces of light, which Rodríguez thinks that can be ejections of aircraft turbines. (However, the FAP sources reported in the day no planes left the base).