In the Hinode satellite image were observed in 2008 areas of  negative polarity  that, in 2011,  decreased  remarkably.  Image: JAXA / Hinode

HELIOPHYSICS. Every 11 years or so, the Sun's magnetic field reverses itself completely: the north pole goes south and the south pole, goes to the north. It's like a magnet that slowly changes its polarity.

But the Sun is not a magnet and this is a complex process, which causes are not known for astrophysics today. But scientists are already able to map the magnetic fields of the Sun. They can study the phenomenon and know when the next change will occur.

For example, this reversal coincides with a period of intense solar activity, that are solar storms. These periods are called "solar maximum".

Recently, what means, at least the last two or three years, the team's Marshall Space Flight Center, NASA, in Huntsvillie - Alabama, headed by Jonathan Cirtain, noted that the magnetic north polarity of the Sun seems to have fallen to a intensity nearly zero. However, at the south pole, only even more recently, the magnetic field only started to decrease.

Cirtain defines what is happening as an imbalance between the north and south poles: The solar north is already undergoing a transition, in a complete disagreement with the south pole and we don't understand how or why. Moreover, the changes observed in the North Pole are advanced in relation to scientific forecasts. This moment of the cycle, the revertion - was expected to happen only in 2013.

These facts make think about the image of the Sun that is circulating on the Internet, showing and saying that one or more unidentified flying objects are in the vicinity of the sun. No one knows what it is but it is speculated that such objects are pulling energy of the star, like a vehicle, capturing energy.

The two informations together (the imbalance of the magnetic field and the presence of a UFO near the star), allow to suppose that this magnetic asymmetry of the sun is not a natural phenomenon. It can be being caused by an exogenous element (not the Sun itself) - interference of intelligent beings whose goal may be very different from a simple stop to fill the fuel tank. 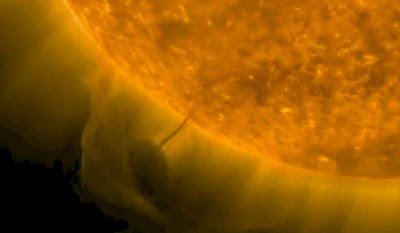 END OF A WORLD. The image (above) is from March 2012. While some so-called conspiracionists or conspiracy theorists call the object, in the picture, Death Star, scientists say it is just a filament, an extension of the Sun. But, the conspiracists (that are researchers but not academics or, even being academics, are unconsidered like serious academics), they have more than one line of thought about this facts.

About this image (above), for example, some see it like a celestial body. These, immediately identifie this object with Nibiru, the Planet X or Hercóbulos. Others come and show various objects, as can be, in fact, observing the videos and photos - and claim that these UFOs are acting on the Sun with the aim of provoking phenomena on Earth. Catastrophic phenomena such as the tsunamis and earthquakes of the recent years.

According to the planning of this suposed council (like think some of conspiracists or researchers non-academics), it is time to purge the planet, to eliminate the problems that global civilization is not able to solve; but, rather, created such problems and multiplies them each day.

The superpopulation, especially of the miserables, is at the root of all these problems. Therefore, the most urgent action is exterminate all excess this population that is hindering the progress of humanity. And the most pratical way of do it is killing them in mass.

The using of the sun as a catalyst for promote ecological disasters that result in mass mortalities is not the only resource that is being used. Other ills, including disease never before seen, degenerative corruption of human nature by means of new drugs, deadly, and other providences are also on the agenda called extermination.

The using of the sun as a catalyst for promote ecological disasters that result in mass mortalities is not the only resource that is being used. Other ills, including diseases never before seen, degenerative corruption of human nature by introducing of new drugs in the societies, deadly drugs and other providences are also on the agenda of the extermination.

All this can seem a fantasy, literary fiction or thing of cinema but, unfortunately, the headlines of newspapers, combine too much with these ideas. Moreover, in more than one case, the reveries of the books and the fiction of the movies, as the Jules Verne tales, for example, did not take long to become an astounding reality. Let's meditate ... And... as the authorities say: Let's try to avoid the panic.