An Alien at Amazonas

It happened in Manaus, capital of Amazonia state. Two British tourists that were on tour in Manaus say they have captured, with your camera, an alien, Brazil. The video has caused a stir on the Internet. 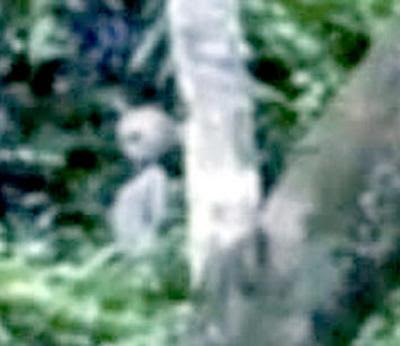 The images show a strange creature beside a tree and what is even stranger, there was a ball of a blue light that appears to be floating few meters behind him.

The creature not made any moves during recording and because this detail arose suspicions that the scene is a fake. But this is not accurate. At one point of the footage, for a moment, the strange being, made a moviment , flexing his back.

The intention of the tourists, according themselves, was to make a footage of a native youngs group and nobody noticed the alien until see the images obtained.

The video has been tested and been certified as authentic by the researcher Michael Cohen that after checking the tape with the help of his team, Cohen concluded that the recording was not altered at any time.

The rain forest of Brazil is known for other cases involving aliens that weren't even investigated by the government. Many believe that this place is very attractive to the aliens for their great diversity of plants and animals.