Brazil Central – The Mysterie of the giant indigenous 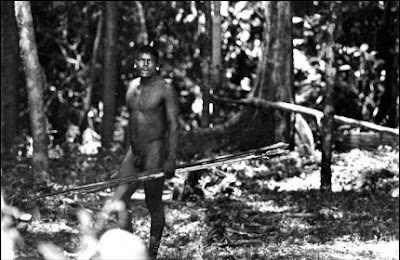 A panará indigenous. His name is Sôkriti and he was
a one of first to made contact with white men. Photo: 1973.
BRAZIL CENTRAL – 1819, october. The botanist Carl Friedrich von Martius and the zoologist Johan Baptist von Spix and their expedition arrived at Manaus, capital of the Amazonas state. At that time, there was not city of Manaus. In that place there was not even a village.
However, in this place is the location of the confluence of the rivers Negro and Solimões, way to the Jupurá river, area yet little known near the border with Colombia. It's through the river that is possible to reaches Manacapuru, the legendary land of the giants indigenous of the Amazon. Today, the mysterious people no longer exists. Only a few traces of their ethnicity survives in some individuos of the region.
Some say that they belonged to the tribe Mura. The Professor Shirley Gomes, descendant of Muras, recalls: They were very tall. My great grandmother died at 114 years and she never stayed hunchback. Academic sources, however, say that the giant indigenous were of the tribe of Panará. 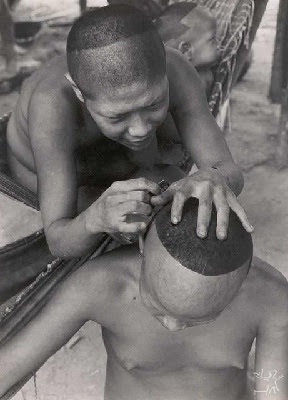 The descendants of the giants shave their
their heads using a plant: the razor grass.
Parakanãs. Photo: René Fuerst, 1972.

Other tribes have called them by other names like krenacore or krenhacãrore. However, they were even known as the giants indigenous. One of the first to be captured, a man named Mengrire, had 2 feet high, well above the average of Brazilian indigenous peoples. Feared by his enemies, the Panará or the Mura were seen as ruthless warriors.
The ferocity of these indians was legendary. His rivals, like the Tchucarramães, they own made the fame of the giants telling the histories their exploits. Orlando Villas Boas, account: In 1950, at the tribe of the Kayabys the Panará were known like men of great height. Their huge arches and axes, that could be have 1.80 m. They terrorized their opponents. The giants were spooky.
During many years observing the indigenous villages of above, from an airplane, authorities and scholars preferred to avoid contact. In 1961 the British geographer Richard Mason was killed upon entering in the territory of the Panará tribe.
They stood hidden for two hundred years in the heart of the forest in northern Mato Grosso. Only in 1973, when the tribe was shaken by the high mortality caused by diseases of whites, they made the contact with civilization as a last hope to survive as a people. Too late. In 1975, the population of the Panara tribe was only 79 individuals. But this situation has changed through the decades. In 2008, there were 374 of them. 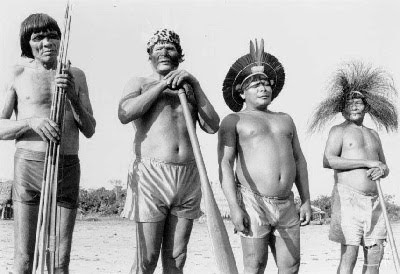 
Mysteries
The mistery of these giants amazonian indigenous remains still today. Even the name of the tribe is a puzzle. While some call these natives Panará, others prefer identify them like Parakanãs. In 1971, in a reportage, published in the magazine O Cruzeiro, Fernando Pinto journalist wrote on these legendary indigenous calling them whites giants! In his text, Fernando Pinto states that these giant Indians belong to a tribe called Parakanã, and not Panara.
The expedition of which participated in the journalist was precisely the goal of find these natives, trying to get a connect an unprecedented in history.About the first time in that the expedition made contact, Pinto wrote: Suddenly, we were surprised by a bunch of naked men. They were tall, shaved heads, red skins, painted with annatto, screaming like frightened beasts and exhaling a strong smell of savage (PINTO, 2004).
The Parakanã belong to the linguistic root Tupi-Guarani. They call the civilizados of "turi". If they met a turi, the turi needs to be completely stripped of their belongings and then, the strange have its head shaved... This is if the person has the lucky enough to be considered a "paché" (friend) ... (PINTO, 2004) 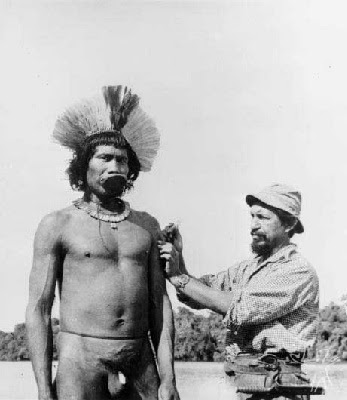 Three tribes, one myth
The comparative study shows that there is some confusion about the which tribe they belonged, the giant Indians of Brazil. There are at least three tribes, speaking different languages although they have inhabited traditionally areas very close that researchers think to be the origin of the giants.
The Panara were on the border between the states of Mato Grosso and Para states. The Parakanã, were found only at Para state. However, The Panarás are speakers of Jê language group while the Parakanãs are speakers of the tupi-guarani language group.
Adding to the confusion, there is a third tribe, Asurini, speakers of a language Tupi-Guarani, being that they also lived at Pará state. Since the nineteenth century, the indians that ruled the area between the rivers Xingu and Bacajá - peoples today known as Araweté, Arara, Parakanã - were named Asurini (or Asonéri) – a word that for the other tribes means "red", according to ethnographer Curt Nimuendajú* (1963c:225 – IN POVOS INDÍGENAS DO BRASIL) . The three tribes are also called by the natives of others peoples Kranhacãcore or Krenacore. The word means "big man wiht round head".
* CURT UNCKEL NIMUENDAJÚ 1843-1945. German-Brazilian ethnologist, anthropologist and writer
Many scholars have denied vehemently the existence of the indigenous giants at Brazil. They say this based on the current complexion of the descendants of those warriors. However, testimonies of the indigenous themselves and reports of researchers of indigenous peoples of the mid-twentieth century confirm that, one day, they existed.

In February 1973, Veja magazine published reportage on the first official contact between the giant Indians and the white men. This happened during a expedition of the researchers of indigenous peoples Orlando Villas Boas (1914-2002) and Claudio Villas Boas (1916-1998), held that year (1973). This adventure turned an historic fact.

The Indians were located on the river Peixoto de Azevedo, in Xingu basin river. Here is an excerpt from the story: They were there. They were athletic men painted black from head to toe. They were completely naked, their hair trimmed up to the ear. They belonged to the kranhacãrore tribe or the giant Indians. Eight of them, guys very young had between 15 and 18 years and none had less than 1.80 m of height ... (VEJA, 1973)

Other narratives confirm the existence of this mysterious tribe: Caciques (chiefs of the tribe) of Juruna tribe (or tribe of Yurun or Yudjá) say that their grandparents had contacts with the giants. They had over 2 meters and a half of height. Today, they disappeared and became "Mamaés" or nature spirits.

Brazil: giants indigenous. Where they came from? For where did they go?
In this history mixed with legend the great mysteries are: who were this people? Where they came from? For where did they go?
During the sixteenth century, many Jesuit priests participated in the colonization process of South America. They wrote about these giants in their chronical. In "Discovery of the Amazon River", three priests – Alonso de Rojas, Christoval de Acuña, Gaspar de Carvaja – they described: they are giants and have between two to three meters tall. The braves, they live naked and they wear big hoops of gold in their ears and nose (STURARI, 2006).
This mysterious nation always avoided the connect with white men. There are indications that at the time of the arrival of European peoples, portugueses, french, holaneses, the giant Indians lived more to the east. Then, they occupied a long strip of land between the states of Mato Grosso, Minas Gerais, north of Sao Paulo, Goias and Para. Today's Tribes, like Assurinis, Panarás, Parakanãs, in past times they were a single culture, a great nãção. The nation of the Kayapos.
The Panará are the last descendants of the Kayapo of south nomadic group who spoke a language of the family Ge, of Central Brazil. In the eighteenth century, these indienous had lived at the north of Sao Paulo and at Mato Grosso. They fought hard against the Portugueses. But, with the discovery of gold in Goiás, in their, territory in 1722, the natives were expelled of these regions. With no option, they moved to northern forests.
About this historic period, according the chief cacique Akè Panará, the elders say that in the past, the white men had killed many of the Panarás. They had shotguns, fire-guns. They arrived in our villages and simply killed the persons. The elders told: If the white men reached here, we have to kill them with bordunas (big maces). They are wild (Povos Indígenas do Brasil).

Who were the giants of Brazilian jungle?

Nobody knows if giants indigenous can have existed in Brazil, or at South America, one day. But a thing is sure: the legend exists. And a curious photo of Orlando Villas Boas near an indigenous very much young and tall exists too. (In this page, above).
Into a labyrinth of narratives made of fantasy and reality two hypotheses stand out: 1. The giants were masters and founders of interplanetary civilizations that had finished their mission in this orb. Then, they gone away nobody knows to where. 2. The ancient giants were survivers of the Atlante tragedy, when the last lands and kingdoms of the mythic continent were swallowed by the waters of the Oceans. Atlantic and Pacific.

Atlanteans or Extraterrestrials
Extraterrestrials or atlanteans, in a point the legends agree: not all of them left the jungle or this planet. Also there were the descendants. The interbreeding surely happened between the people more developed and individuals of the primitive tribes of South American. The giants begun to disappear after that the european explorers had arrived at the epoch of Great Navigations, in the XVI century.
Although have fought with the invaders that came of the sea, the giants had no intention to expose to themselves. They understood the power of the war of the foreign. The guns of fire. The blood of peoples shed in vain. They chose to disappear!But ... how to do this? How to make to disappear?
The legend has its answers. If they were extraterrestrials, they can have returned to their own planet or simply they went ahead with their travel trough the cosmos. But if the giants were earthlings remnants of the Atlantean Race, perhaps, as some indigenous say and also forest peoples and of the wetland at Brazil Central, only perhaps, the giants could taken to have refuge in the mythical cities and underground tunnels built by their atlanteans ancestors.