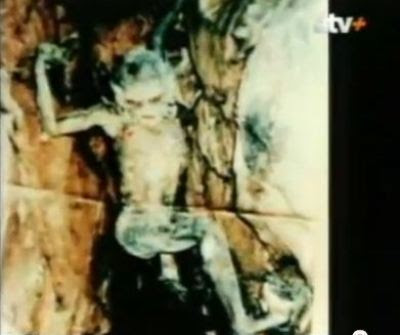 PUERTO RICO. The problem and the mystery are ancient. It goes back to the 1970s. In different locations at the island of Puerto Rico (which is U.S. territory and one of the vertices of the mysterious Bermuda Triangle) periodically occur outbreaks of strange deaths of animals that are found with intact bodies whose blood was completely drained. In some cases, but not all, occur mutilation and removal of organs.

The absence of blood on the corpses and the fact that most victimized animals are ruminant mammals gave rise to the denomination: chupacabras (goatsuckers), to designate the unknown agent responsible for the deaths. During all these years, many people hinted that the occurrences were just cases of attack by coyotes or others carnivorous predators similar. 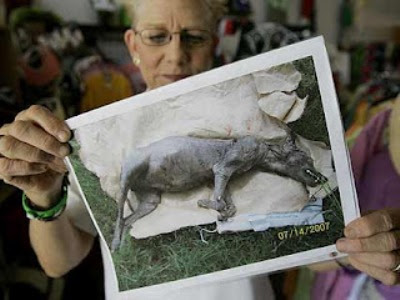 But this never was confirmed. Is a rational explanation but can not be applied to all cases. Unlike the common predators not could be identified in most episodes. At maximum, eventually - were captured - some dead animals similar to the canines or wolf species, but they were bizarre creatures, suggesting miscegenation or mutation of the animals, such as in the photo above, a register of 2007.

This year - 2012, attacks resumed. In mid-June, the chupacabras came back to the headlines. The first attack happened on the island of Vieques or Isla Nena (something like Child island), an small portion of enisle land and municipality that is part of the territory of what is called Isla Madre, that is Puerto Rico.

There, not only horses and ruminants, rabbits and birds were found dead as the 30 hens and roosters of the resident Jose Martinez, 26 years (in 2012) and his wife, Jeami Peralta. Martinez tells: I woke up at 5:30 in the morning to feed the fowls. It was dark then used a flashlight. When I saw the chickens were dead in their cage. They were pale, with holes in the back. There had no blood in their bodies. It looked like a battlefield. One of the chickens of Mr. Martinez attacked by a mysterious being. The birds were found dead, without blood.

The newspaper El Nuevo Dia made ​​a reportage at the island and recorded the footsteps of an animal near the site of the deaths. The population was frightened. There were rumors that there was a panther on the loose on the island. The animal would be owned by an American tourist whose yacht docked at the shore, in the beach of Punta Arenas - had fled and entangled in the forest.

The police commissioner of the city of Vieques Jose Belardo, who reported the facts to the Civil Defence and Emergency Management - did not confirm the hypothesis of the Panther: There is no physical evidence. Just rumors. But we can not deny that people are afraid. *

* In addition, Panthers rip their victims to eat; they don't make holes to feed with little tubes. Unless that be an ingenious panther toothless.

The chickens of Mr. Martinez were not the only victims. In the neighborhood of Martineau, another birds were found dead, without blood, with a hole in the body. The same happened with some horses, that roam freely in the city streets. 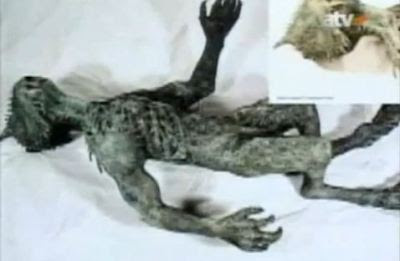 A fact to be considered in the possible existence of these strange creatures, especially at Isla Nena, is that - in the past, the islanders would have had problems with the U.S. Navy and there were rumors that in Vieques were performed genetic experiments. Therefore, many residents of the place believe that chupacabras (and the gargoyles, which are something like chupacabras winged) are mutant animals that escaped from military laboratories.

In late June, the puerto-rican ufologist Reinaldo Rios announced a visit to Vieques to hunt the chupacabras with the support of local authorities, including the mayor of the city, Evelyn Delerme - and the help of snipers and veterinarians.

Besides being a researcher of the UFO phenomena, Ríos is an expert not only in chupacabras, but also in other type of mythical creature, winged, also bloodsucker - he calls gargoyle. 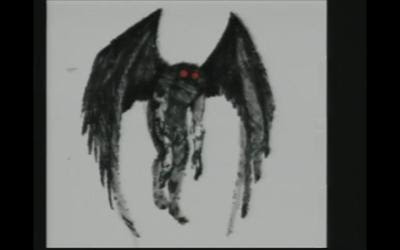 Drawing of a gargoyle, according descriptions.

In the case of Vieques, Reinaldo Rios said that the problem needs to be investigated precisely because there are doubts as to the nature of the creature that would be perpetrating the attacks. Ríos explains: We still have no conclusions. I have to visit the area - and said that on the eve of the recent attacks on Vieques were seen strange lights in the sky in the region. We need to do the necropsy of the animals.

However, Reinaldo Rios did not had time to dedicate himself to the cases of Vieques. Before to begin this mission, in July (2012) - the attacks to animals had multiplied in other places. Sightings and new attacks were occurring in numerous localities of Puerto Rico. Moreover, among these new cases, many were witnessed by several people who described the mysterious predator as a winged being, ie - a gargoyle. 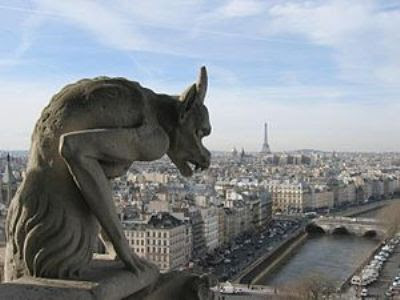 Gargoyle of the Notre Dame cathedral, Paris - France. Gargoyles are - originally - architectural structures. They are ornaments of gutters or storm water spillways. Became a common decorative element in the Middle Ages especially in cathedrals.

They were generally conceived with the forms of monstrous figures, half animal, half man, demonic-looking, beings, often, winged. Gradually, these sculptures began to be created solely for their artistic value but continued to be installed, mainly on the rooftops.

It's curious that the gargoyles of cathedrals and churches, despite their diabolic features - were considered guardians of the temples catholic-christians. His features, grotesque or frightening, fueled the popular imagination, and thus borned the belief that these creatures of stone transform themselves in terrible live beings during the night.

At Carolina, one of the main cities of Puerto Rico, in the end of June (2012) one of these mysterious creatures, a gargoyle, would attacked - not an animal - but a cop who had to use his gun to repel aggression.

Witnesses described the predator as a gargoyle, an humanoid animal, large, about 1.80 tall - with characteristics of bat like wings, black, red eyes and smelly smell, of something rotten - like sulfur. The policeman said the gargoyle tried to hurt him with its claws. He shot several times but, with the first shot, the monster absconded. 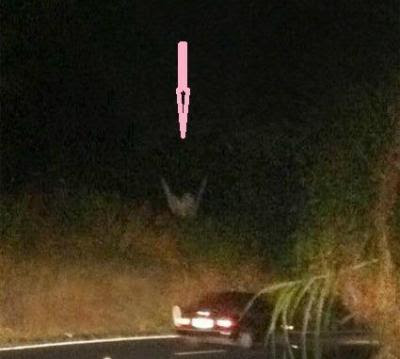 This photo was taken by a citizen in the town of Barranquitas, in this period recent attacks of gargoyles in Puerto Rico. An intensive search has been performed in the area. The attacks happen mainly during the dawn. The population is shocked. July, 2012.

On July 21 (2012) a citizen has achieved something rare: a photograph of a gargoyle obtained near the Centro Puertoriqueño de Leonism, an international philanthropic,an institute to rehabilitation and recreation of children in Barranquitas, a town in central Puerto Rico. The gargoyle was also seen in Guanica, Guayama, Cayey and Toa Baja. 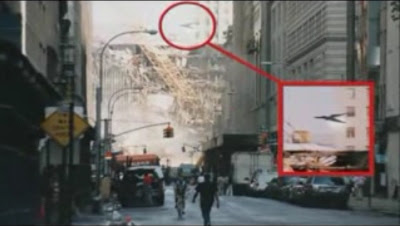 A winged creature, a gargoyle, according Reinaldo Rios and other scholars of the subject, a "supernatural being" flying over the vicinity of the World Trade Center in September 2001.

Given these facts, Ríos says that Puerto Rico is on red alert because, sightings of these creatures, according to documented history, appear to be - somehow - related to the iminence of tragic events. For example, one of them - was seen and photographed near the World Trade Center, the twin towers before the attacks of September 9. 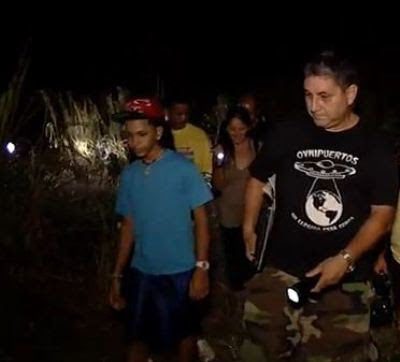 Then, another hunting was set to take place on July 26 (2012) in the areas adjacent to the river Loco [http://www.prfrogui.com/geocities/rios.htm], which borns and runs along the town of Yauco and empties into the Caribbean Sea.

Ríos said that persons that wanted to join the hunt, that flashlights, tracking and communication equipment - such as GPS, celular phones, ipads and laptops with internet access, maps and camouflage clothing would be needed. 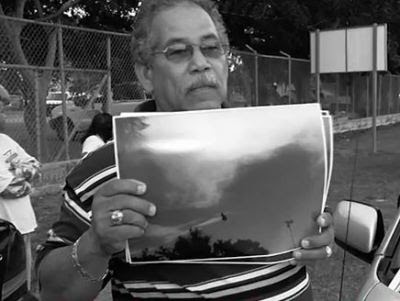 Furthermore, the researcher heard testimonies from area residents who saw the monster in order to delimit the search areas to organize the teams of hunting.

All these efforts, among the months of June and July, to locate and capture or kill chupacabras gargoyles - failed. No creature was sighted by hunting teams. But Reinaldo Rios and other investigators of the supernatural do not give up, because what is killing the animals, the attacks continue in Puerto Rico.

Now a new possibility is being considered: vampires. After several reports denouncing the alleged existence of a cult of followers of vampirism in the city of Yauco, another hunt is being organized: a hunt for vampires of Yauco.

Reinaldo Rios believes that vampirism is an evil on the rise. Many people are willing to defy human nature and try depertar the power of perception, senses, at a level comparable to that which characterizes certain animals. Obviously these people are influenced by literature and fiction about vampires in general.

Ríos explains: Some animals can see well in the dark, others have more sensitive hearing, some are extremely agile and much fast. Others have the power to hypnotize their prey, among other skills. These powers are desired by members of these sects. Then, they are interested in the consumption of the blood of certain animals: to absorb potential. We do not know yet whether there are doctors involved in this movement.

The hunt for vampires Yauco was scheduled to take place in early August, during a full moon. The hunters plan to do a vigil in a mountainous region, which location has not been revealed but Ríos said he had privileged informations about the places where vampires were seen, as some forest areas.

Ríos invited the prefect of Yauco, Abel Nazario (2012) to join the hunt. The researcher understands that, the problem is a priority of public safety. He appeals to the authorities and population ...to cooperate in identifying these people... - practitioners of vampirism. In the moment, they are attacking only or mainly animals ...but recently, there were attacks on people from whom portions of blood were drained...

Preventive action is fundamental to ...prevent the spread of this practice... that threatens yaucanos (yaucans) and also the neighboring towns, as Guánica, Guayanilla and Ponce. Ríos also requested the support of religion: All churches of Yauco are invited to be in prayer during our vigil in order to purify the etheric energies of of the city ...to eliminate malignant influences. 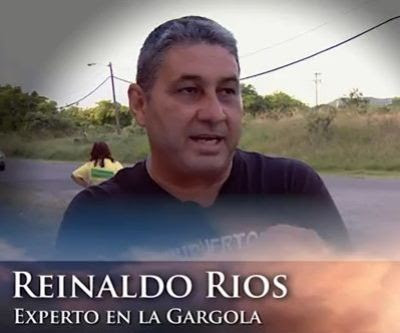 Reinaldo Rios, is Puerto Rican, first grade teacher at School Muñoz Rivera in Yauco. Math is a freelance researcher of ufology of supernatural phenomena, especially the study of mysterious creatures. It was the forerunner of the idea of building a ufo-puerto (ufo-port) at Puerto Rico. But so far, the project never got out from the files.

He became internationally known in 2010 when organized the hunting of a gargoyle in the ancient Central Açucareira of Guánica on the southwest coast of the country. In this initiative he sought evidence of animals and bloodthirsty mutants. This hunt mobilized important personalities in Puerto Rico, including the prefect of Canóvanas. However, this mission did not achieve results. 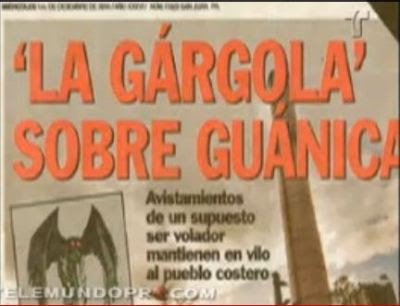