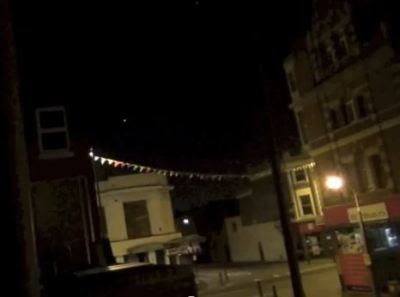 UK. This images were made ​​in London, at dawn on Friday, August 3 of this year (2012), by the brasilian - Leandro Trivisan, residing in the city - that he intended to shoot the moon * in a simple experiment to test your camera. However, looking at the opposite side of sky, Trivisan saw a strange bright spot. therefore, the record of the object that appears was done so - by chance. 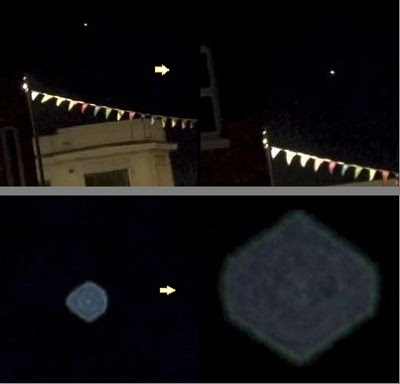 Using the camera zoom, it was observed that this UFO does not present the appearance of a vehicle. For its brightness and behavior may be considered a Plama-UFO.

It should be noted here that any UFO means unidentified flying object, or be - such objects may or may not be crewed, and also may or may not have the characteristics of a vehicle or spaceship made ​​of metal or solid material of any kind. Precisely for this reason, the concept of objects and - "beings-plasma" was recently introduced in the literature and UFO research.

The term "plasma" is used when the researcher or observer refers to a bright object perceived as something that provides indefinite contours, or metamorphic. The reference to the object as plasma, in this context, serves to indicate such an object can not be identified with any body that is perceived as a solid unit of any kind and recognized as having a defined classic lines and frequently used to describe UFOs, as circle, sphere, discoid, cylinder, triangle.

The plasma UFOs are an enigma as to its physical nature and ontological: about of what they are made and about what they are. These UFOs are beyond the common concept of "object" why is not possible characterize them - using the optical instruments available - such as vehicles or machinery of any kind, although they may in fact be something like this, they move themselves at an extraordinary speed. However, in many records, they can be seen hovering in the sky in slow movement or immobile for several seconds or even minutes.

The zoom images, that allow a more detailed observation of these objects, increase the mystery of this plasmatic objects because, with the approaching, its appearance remains elusive, predominating an intense emission of light, color change and flexibility in the way.

Therefore, some observers who research the phenomena of UFOs have pondering the possibility that such objects, maybe - they not be conventional vehicles, machinery, spacecrafts, at least not entirely.

This suggests that there may be an organic component in these objects. It is even possible that the UFO's plasma - not be objects in any mode, on any aspect. There is no logical impediment that can prohibit definitively conceive them as living entities. Like intelligent beings able to move in space and time without the resource of any vehicle.

Nor can dismiss the hypothesis that plasma UFOs that appear as a point in the sky, either at night or even during the day - maybe they not be a unit. They can be clusters of intelligent beings made ​​of pure luminous energy moving in a complete integration.

And - considering that there must be a huge gap between the observer and the UFO-plasma observed, it is reasonable to assume that these"objects" are large. They can be - really - giants.This does not prevent that can be living beings of a specie completely unknown of the earthly biology. But - perhaps not entirely strange for the mythological universe of the humanity.

Who knows the biblical descriptions of entities called angels or the gods of Hinduism - the Devas or even the entities called Asuras - know that these creatures are far from having a humanoid appearance. Its size, also - did not match the dimentions of any human being.

Unlike. Angels are described in the scriptures of more than one culture as inhabitants of heaven, gigantic creatures, terrible, fearsome warriors endowed with eyes and flaming swords that often act together as a Legion.

Moreover, they are shape shifters, that is - able to take human form when it suits them. In some ancient texts are identified as observers (called Watchers) of Creation, messengers of the Creator of All Things - responsible by interferences in the destiny of mankind in decisive moments of evolution. Let's meditate...

Eliminating the chance to be a drone, unmanned aircraft, military, of the last generation, designed to patrol airspace and for espionage in the country own or someone else. The Drones have, as some of its general characteristics:

1. usually have a triangular shape defined;
2. Its technology allow them to be virtually invisible to cameras and radars common, much less appear with a dot of light so bright and flashy in the night sky;
3. their lights are fixed and are not installed by mode to circumvent the vehicle, much less - lights on, what would be completely contrary to the purpose of espionage and patrol;
4. their speed, although remarkable, do not compare to the behavior of UFOs plasma;
5. are not metamorphic;
6. drones don't perform all movements and displacements possible to UFOs-plasma.