Ouija board and evocation of spirits, macabre joke.

VENEZUELA. It happened in the region (district) of Santa Cruz de Mora, in town of Antonio Pinto Salinas (Salinas), state of Merida, Venezuela. On the morning of Thursday, May 31 (2012), in the Liceo Bolivarian Eutimio Rivas, a school, about 30 students from different school years, aged between 12 and 16 years, were gathered in a room for a session of the game called Ouija, a board, it is assumed - that serves for get communications with dead spirits.

In the begin, everything seemed quiet. Someone laughed. One student was conducting the ritual with their hands on the guide (that can be an timber arrow or a glass ). In certain moment, this student began to behave strangely and the fun turned into panic. Apparently, a spirit manifested itself taking the body of one of the participants.

According to the report of a student, some colleagues began to speak in a different voice and a different language. In latin. Objects start to levitate. Somebody fainted. Others, who fled the room, also fainted in the gate of school. A wave of hysteria swept the place attracting teachers. One of those affected stood in a state of intense physical and emotional disarray. Four teachers were required to contain it.

Medical help and authorities were called. First, the paramedics arrived. After, the firemen, and finally the police team of the Cuerpo de Investigaciones y Forensic Scientific Penales. 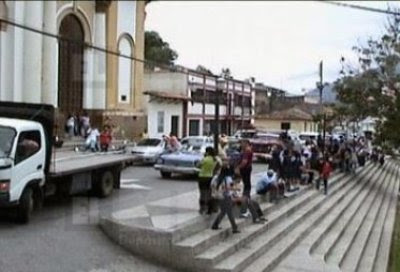 Church of Nuestra Señora del Carmen, in Antonio Pinto Salinas. The priest commented: All this is the lack of spiritual education, lack of religion.

Fifteen students were taken unconscious to the emergency room of Hospital Heriberto Romero. Others 56 - shaken, were attended by the school counselor.

Twenty - suffering nervous breakdown, were referred to the Church of Nuestra Señora del Carmen, in Antonio Pinto Salinas, where they were treated with prayers to ward off the evil force with prayers. All students were dismissed. The classes suspended. Police are investigating the case.

The priest of Nuestra Señora del Carmen, Alexander Rivera, said: All this is the lack of spiritual education, lack of religion. 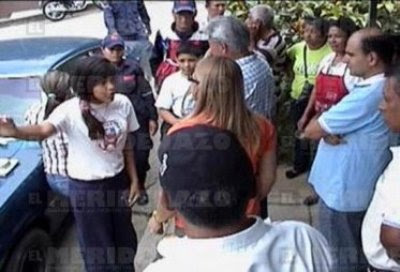 This episode that occurred at the Liceo Bolivarian Eutimio Rivas was not a casual joke. The fact is this same school, other unusual events were already happening. As recently as May 21, four teenage students fainted after suffering seizures.

On May 30, the same situation was repeated with five other students. In both cases, the youths were driven to hospital where doctors failed to diagnose any physical cause, organic.

On Friday, June 1, a schoolgirl from that same school, residing in the neighborhood of El Calvario, suffered convulsions and fainted at home (because the classes were suspended). A witness to the incident, identified only with Julio Silva says: The girl stood incorporated, was taken by a spirit and nor the holy water, the blessed branch or the Bible were sufficient to put an end in the situation. She was possessed.

In this same month (May, 2012), the parents of a schoolgirl were to the school to inform that her daughter was with problems: she was incorporating an aggressive spirit, and for this motive, the girl was not attending classes.

In this situation, some people remember that in this school, three years ago, two students - committed suicide in a period of eight days.