The Return of Nibiru 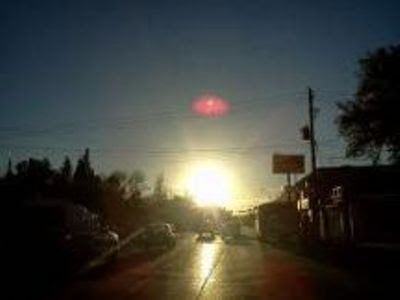 Nibiru visible - above the rising Sun

NIBIRU. Among the Russians, even scientists, many no longer deny the existence and approximation of Planeta X or Nibiru. And this approximation can be catastrophic. Worst, will be, in astrophysical terms - a catastrophic thing.

Nibiru in a Russian TV news. And this video was posted on Youtube in 06/09/2011. The Nibiru hypothesis may not be as absurd how many we may to desire.

Those who claim this fact allege that: there is a new orb in the sky, a red stain that, if previously - it only could be observed by astronomers and astrophysicists but, after May 1012, began to be notable to the naked eye.

This spot would be the mysterious Nibiru planet. The possibility of existence of this planet was only recognized by space agencies like NASA in 1982.

However, the Sumerian writings - traced in cuneiform, have postulated, for over 5000 years, this cosmic reality, which - that ancient civilization called "winged disk" and warns: its emergence in the sky is a sign of imminent catastrophic events.

The asteroid impacts on Earth have become a common thing, irrelevant. Humanity now is subject to a phenomenon much more serious. Nibiru will go pass so close that its strong gravitational influence, will cause significant environmental convulsions.

This maxim approximation is expected to take place in late 2012. The Earth's rotation will be affected, the magnetic poles - they will change - causing a new Ice Age as well as floods and the destruction of at least two thirds of all living beings on the surface of the globe.

For many theorists Hypothesis Reptilian, Nibiru is the planet of the gods of antiquity. Reptiles, whose presence in Mesopotamia the Sumerians was recorded. These beings that were described as having reptilian features will come from the sky.

For many theorists Hypothesis Reptilian, Nibiru is the planet of the gods of antiquity. Reptiles, whose presence in Mesopotamia the Sumerians was recorded. These beings that were described as having reptilian features, according the sumerians, will come from the sky, because they are cosmic travelers.

When their planet, Nibiru - arrives near the Earth, to each 3,600 years, they take the opportunity to visit this planet - because they have been here many times before, with the goal to exploited natural resources.

Here, they created an hybrid race, through genetic experiments in which, using primate mammals gave origin to workers slaves, the human race. By this fact, they were called Gods by the ancient nations. This ideias are, for example, of reseachers as Zecharia Sitchin, that exposed this theory in numerous books.

The presence of Nibiru in the sky would be the realization of an ancient prophecy: the arising of the Second Sun, red. Coincidence or not, this event is mentioned in the Mayan calendar.

The academic denials on this Mayan "end of the world" have a logical sense. The world will not end, nor humanity will be completely wiped out. More specifically, what the Mayans knew and foresaw was the advent of the end of a cycle, the end of a certain Time, the end of this Age - only, and the beginning of a New Time, marked by the return of the "Gods".

The negative of scientists and government authorities have a motivation. Nothing can be done to stop the march of a planet. The confirmation of an event like this can only result in hysteria, panic and actions desperate that are absolutely useless. There is no escape or shelter able to save over 6 billion people. Few will survive, either in spacecrafts or as ancient people can have made: taking shelter in the undergrounds, some of them because nor all places, caves and undergrounds of the world are, really, insurance.

And - please, do not stay in panic nor leave your life to back, running, making stocks and looking for a cave or a bunker. It will not help in nothing. It will only perturb your soul. Think, everyone dies ... a day. The question is not if but when and how. Let's meditate...

Marcadores: end of a world, Nibiru