Evolution: Because Reptilians Can Be the Natural Origin of Man 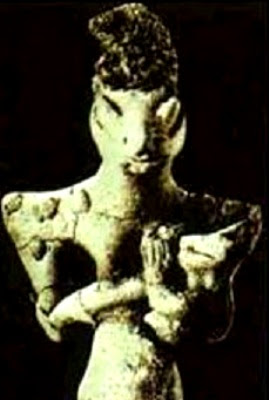 Dinosaurs may have evolved, may have become intelligent and even, have migrated from Earth to cosmic space where they can colonized other planets. This is the theory that the scientist Ronald Breslow of Columbia University who, in his study presents evidence of the probable origin of homoquiridade into amino acids.

The central hypothesis postulated in this study is that some molecules, including DNA molecules mirror themselves, among themselves, a phenomenon known as chirality.

On the other hand, some researchers suggest that amino acids, essential for the emergence of life as is known, came to Earth aboard a meteor, there are 4 million years. Breslow considering that this hypothesis like a truly possibility - the Panespermia like is called this hypothesis - it is likely that life on otherplanets be based on these same units of essential amino acids.

Beslow, then, conceive the logical idea that amino acids are the source of life and, by extension, to the arising of the Dinosaurs.

He says: Mammals, like us, prevailed on this planet because the dinosaurs were, supposed, have been exterminated completly by a natural cataclism. But in an Earth-like planet, this event may not have occurred (even here, is not proved that this event was, in fact, the cause of the extinction of the dinosaurs earthlings). If they were not annihilated, on Earth or in any other world, the dinosaurs would have evolved and today, they could be the dominant species in this or any other planet.

If this had happened on Earth, the survival of dinosaurs, mammals could nor exist, or had never evolve. Probably, we would be easy prey of the sauros Lords of Earth, and they would have by mankind  the same consideration that humans have in relation to a herd of cattle.

The idea of ​​this scientist is one more argument for the conspiracy theories that argue for the existence of a hidden elite, of reptilian beings who, even today, controls the fate of Earth, specially, the destiny of Humanity.


Since the Archons, the belief of the Gnostics, the Predators, announced the esoteric of Carlos Castañeda (The Devil's Herb and other books) to the Anunnaki, revealed by Zecharia Sitchin - the shadow of reptilians has been present in the collective unconscious of human civilizations of mammals.

The researchers of the "Reptilian Conspiracy" already have a profile traced of this cursed race. Beings are, of course - intelligent and belong to a world almost supernatural. Very advanced technologically, belong to a family of bipeds Reptilian, as the troodonts (Troodon formosus) and laelonosauros (Leaellynasaura) and its shape is anthropomorphic or humanoid. Also called cryptids and also dinossauroids. 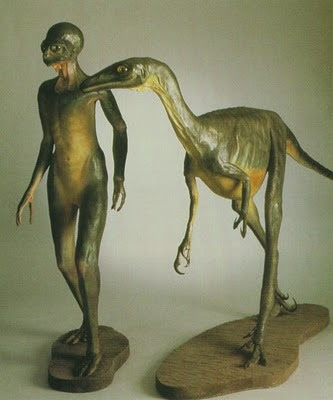 Troodon and its possible evolution: reptilians

Their presence on earth is lost in the darkness of ages. Would be more ancient, as a species, of that any record prehistoric can show and unlike contemporary scientists think, are survivors of the event, which - be there what it could be, presumably, wiped out the dinosaurs. But, eventually - those primitive reptiles, not were completly exterminated.

For many scholars, this event was the fall of a huge meteor in the region of the Yucatan Peninsula. The fall - in itself was not the cause of the annihilation of an entire fauna and flora, but the drastic climate changes, that reached the whole planet - this change, triggered by the disaster, would have been fatal to the life forms of the time.

According with one version of the reptilian theory, these environmental difficulties would not have been able to exterminate all the individuals of the species of dinosaurs. (What it is an idea very possible).

Those who survived, adapted. Were collected, sought protection in caves, underground of the planet and there continued his march of evolution, physical and mental. It is absurd to suppose that the struggle against adversity has somehow stimulated the development of intelligence of those beings, as with humans.

Those who survived, adapted themselves to the adverse conditions. They can have found protection in caves, at the undergrounds of the planet and - there, they continued their evolutive march, physical and mental. It is logical to suppose that the struggle against adversity has somehow stimulated the development of intelligence of those beings.

This happened with humans, that faced more of one glacial age - and they survived having developed devices, tools, techniques each time more advanced that made the life over the Earth, much better and more easy.

THE POSSIBLE REALITY OF THE MYTHOLOGY 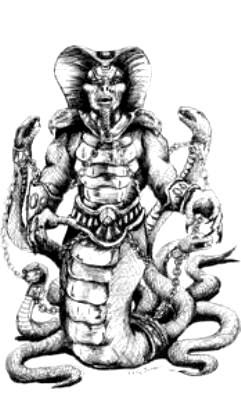 In the ambit of mythology, the reptilians are serpent-gods. Snakes are present in the legends of all peoples of the world. In general, this recurrence is interpreted as a symbology: snakes represent wisdom.

Even in the Judeo-Christian Bible, when the serpent is accused of causing the fall of man, it induced Eve to eat a particular fruit: the fruit of Knowledge of good and evil, a fruit which gives wisdom.

In the biblical account, the serpent is described as an animal that, before being "owned" by the fallen angel, (for some, Azazel, for others, Lucifer), was endowed with the locomotor and manipulative members: legs, arms and hands.

Craw on the own belly was the God's punishment, aplied to the serpent by the corruption of Eve. The devil himself has, in some representations, features of reptilians: forked tongue, body covered with scales, tail, fangs and sharp claws.

In India, these rational serpents, are called Nagas or Sarpas, who also live undergrounds and are associated with wisdom. The nagas interact with humans. In the Middle East, the reptilians are regarded as demons, or a race of djins (genies). In ancient Greece, Cecrops (image above - in Greek, Κέκροψ - means "face with tail"), for some, were an autochthonous, native of Attica, or be - son of Gaia - Mother Earth. Gaius Julius Hyginus (Spanish, 64 BC-17 AD), writer at Ancient Rome - said that he, Cecropes, was the son of Vulcan; Jerome Stridon (347-420 AD) or, for the Catholic christians, St. Jerome, said he was an egyptian who ruled Athens between 1558 and 1508 BC.

This legendary personage, who would have been the first king of the greek city-state was described as being half man, half snake.

In the Age of the Titans, which preceded the advent of Men, the Klyteios giants had snake tails instead of legs. As in other traditions, to this demigod, Cecrope, is attributed to the introduction of the principles of civilization: the abolition of bloody sacrifices, monogamy, and the invention of writing custom of burying the dead.

In China, Japan and Korea, the tradition speaks of ancient times in which the world was ruled by dragons-kings, who inhabited underwater kingdoms and gave origin to a human terrestrial lineage. These beings had a metamorphic ability to change its form draconian to a human appearance.

Among the Toltecs and Mayans, the Gucumatz god is called serpent of wisdom, who gave the Knowledge to Humanity. For the Aztecs, Quetzalcoatl, the master of science, is called by other pre-Columbian cultures of Kukulkan. In Colombia, Bachue, the first woman, a goddess who was turned into snake, is the Celestial Serpent.

The Hopi Indians (USA, Arizona) believe there is a reptilian race in the world, the brothers-snake, who live at the underground. This belief, keeping local differences, is also shared by other north Americans natives, like the Cherokee.

It is curious that, being the snake the central persona in these myths, the race of the hidden masters of the world is called the reptilian and not, more appropriately - Ophidian ...

EVOLUTION: FROM REPTILE TO MAMMAL PRIMATE

Recently (April 2012), at Sri Lanka, a chicken was by viviparous mode, or be, gave birth to a chicken without an egg. The report said: The chick was born healthy and fully formed. The chicken died. But a fact like this shows that the nature of this planet is exceptionally versatile and creative.

Amid all these speculations, it is somewhat surprising that nobody among conspiracy theorists, evolutionary biologists and scholars of mythology, none researcher- never, has cogitated that some reptiles, survivors of a cataclysm, could have evolved to a life form of primate mammals.

Recently (April 2012), at Sri Lanka, a chicken took a chick by viviparous mode, or be, gave birth to a chick without an egg. The reportage says: The chick was born healthy, fully formed. The chicken died. But a fact like this shows that the nature of the life at this planet can be exceptionally versatile.

Even today, some people and not so rare as well, eventualy, born with a called malformation, a tail. Others have genetic changes that make with their skin be thicker and hairy. Nature has a law very efficient to preserve the lives of creatures: adapt to survive.

Dinosaurs and snakes, these animals have been and are oviparous. It happens that, before a harsh environment, this form of reproduction can be a huge disadvantage. Can mean that complete extinction of the species.

Embryology studies have shown that human beings, in its stages of development, during gestation - have, during some time, the residue of a tail and the bone called coccyx, located at the lower end of the spine has the characteristic of a residual tail.

Even today, some people - and is not so rare as well, eventually, born with a so called - malformation that is, truly a tail. Others have genetic changes that make with their skin be thicker and hairy.

Nature has a law very efficient to preserve the lives of creatures: adapt to survive. We know that dinosaurs and snakes, these animals have been and are oviparous. It happens that, to face a harsh environment, this form of reproduction can be a huge disadvantage. Can mean that complete extinction of the species.

Eggs stay exposed to the climate aggressions, hunger of predators, accidents. Require constant vigilance. The eggshell, even that a dinosaur egg be most strong than an chicken egg, even thus, it still fragile if subjected to very violent shocks and other adverse conditions.

The viviparous mode of reproduction provides to the fetus the safety of the the uterine environment. The protection of being inside the body of an adult being, gives a major possibilities of avoid a variety of aggressive agents. In addition, mammalian offspring has secured the safe food supply during the a period in which their body is still extremely fragile.

Maybe, just maybe, the homo sapiens of today - be - the unsuspected inheritor of dinosaurs, reptilians or ophidians - of a very much remote past of life on earth. And this global mythology around the reptiles can be only a memory of a nightmare, of the beings who were one day.

LINK RELATED - The Arising of Sex