Found: Thyatira. An english Ship sunk on the nineteenth century

VIDEO - Rede Globo de Televisão
BRAZIL. On the coast of Alagoas state, northeast of the country - in the open sea, a shipwreck was discovered. The first images show that the vessel was found wrapped in old fishing nets and other debris.

(On the place, for many years, is practiced fishing of shrimps). Moreover, the structure - was covered by barnacles that formed a crust. (Barnacles are sea creatures and crustaceans - that adhere to surfaces underwater rock formations, the skin of other animals such as whales, for example, and boat hulls. 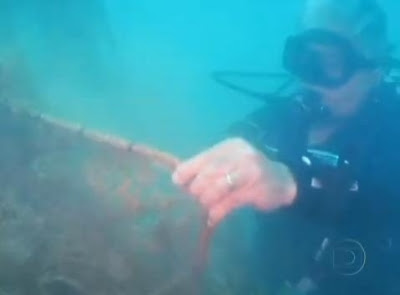 The rescue of Thyatira
The discoverer of the piece was the diver Fernando Vagner who went to the site only to rescue a net of a fisherman - who was trapped in the depths
Fernando announced his discovery and an expedition was organized to investigate the case. The naval enginner, Francisco Glegiston tells: In this area of the coast the raids were frequent (But, later, was verified that this was not the case). It is an ancient ship (at this point of the investigation, researchers hadn't - yet - the identification of the origin and age of the find)
The investigation continued. The stern was examined. A piece of crockery with inscriptions and a symbol was found - as well a ceramic object. The mast broken revealed that it was a sailing craft, a sailboat. (There hadn't motor).
Finally, taken the proper cares, a big fragment was rescued by means of a cable. The crust of sediment was removed and - then - appeared the figure of a compass rose and the boat's name: Thyatira. The mystery was revealed.
TThe Thyatira was a sailboat from 60 meters in length and three masts. He left London bound for Rio de Janeiro on July 16, 1896 and disappeared or, better, it sank on this point of the Brazilian coast.
In the epoch, according to the reports of survivors, there was a fire on board. The crew could not get to control the fire. It was a very dangerous situation because there was 800 packets of dynamite on board. Given the risk, the commander gave orders of "to abandon the ship". All crew survived. The Thyatira broke in half in a loud explosion that lit up the first hours of the dark dawn
SOURCE: Encontrado navio naufragado há mais de 100 anos em Alagoas.
Primeira Edição, published in 12/03/2012
[http://primeiraedicao.com.br/noticia/2012/03/12/encontrado-navio-naufragado-ha-mais-de-100-anos-em-alagoas]