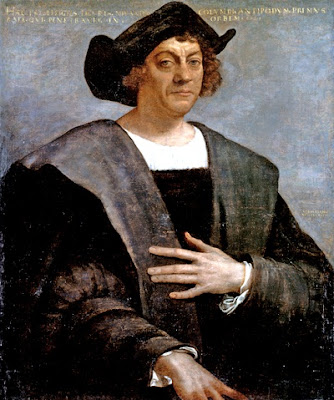 Posthumous portrait of Christopher Columbus by Sebastiano del Piombo, 1519
HISTORY. According to academic history - the Americas, especially the lands of Central America and North America, were discovered (or rediscovered) by the Italian navigator Christopher Columbus (1451? -1506). The biography of Columbus has always been mysterious. Although - generally considered to be Italian, born in Genoa this information has always been questioned.
Recently, researchers that investigate the life of the sailor claim to have discovered the true identity and the real historical role of the man who became known as Christopher Columbus. José and Antonio Mattos e Silva (engineers, and like appear, brothers) - according to these scholars, Columbus was not born in Genoa in Italy but in Portugal around the year 1450, a village in the Alentejo - south-central region of the country - called Cuba.
His real name would have been Sancho Anes da Silva - son of the "Infanta"* Leonor of Portugal - future empress of the sacred Roman Empire and Dom João da Silva Meneses (future Blessed or pious Amadeus)
According to official history, Columbus had his project of to navigate to the West - in search of an alternative sea route to India - rejected the Portuguese monarch of the epoch, Dom João II. The idea was welcomed by the Spanish kings, called the Catholic Kings, Ferdinand and Isabella (Fernando e Isabel). However, the hypotesis is that during all the time in that he had stood dedicated to realize your adventure, Columbus was - in truth - in the service of the Portuguese kingdom, as a spy. 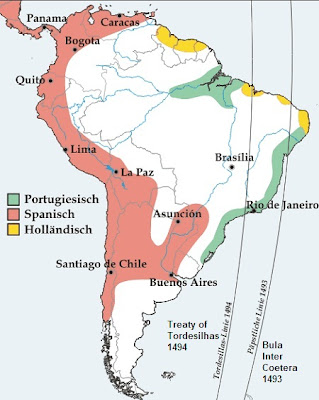 The passage by Portugal and the meeting with the monarch are - indeed - something of suspect. For researchers, Columbus reported his findings to the king Portuguese before doing the same with the Spanish kings. Ensuring thereby, the economic and political advantage to Portugal, acting as a spy
The aim was to influence the decisions of the (Bula Papal) Papal Bull Inter Coetera, promulgated by Pope Alexander VI that - by the regulamentation of the possession of newly discovered lands in the West, would be favorable to the interests of Portugal as regards the specification of the landmarks of the territory.
The Papal Bull was published on May 3, 1493, before of Vatican know the outcome of the voyage of the browser "Genoese". Later, Portugal got an even better agreement with the signing of the Treaty of Tordesillas (Tratado de Tordesilhas).
* INFANTA. Title attributed the daughters of the kings of Portugal and Spain
** FREGUESIA. Something like a parish, an administrative division related to the management in the religious, ecclesiastical, its English equivalent is the county or parishes)
*** AZAMBUJA. Town, city of the district of Lisbon - and district, something like to a state of a federation.