Dolphins follow Navy ship in a travel to isolated islands

Video by Globo Amazônia/Rede Globo de Televisão.
Accessed In Youtube [http://www.youtube.com/watch?v=tQM9QdriZIo] - 11/03/2012
BRAZIL. A group of bottle-nose dolphins (Tursiops truncatus) monitored the travel of the ship "Navio Balizador Comandante Manhães" to the Archipelago of São Pedro and São Paulo, located 1,010 km away from Natal (capital of the state of Rio Grande do Norte). At least ten animals swam alongside the boat, including some puppies.
Those waters attract marine animals such as whale sharks, tunas and dolphins too, which breed in the region. With an area of ​​17 km² and only 18 meters above of the sea level, St Peter and St Paul are an area guarded by the Navy of Brazil, which - by 14 years, has kept a scientific station inhabited constantly by researchers from several universities. 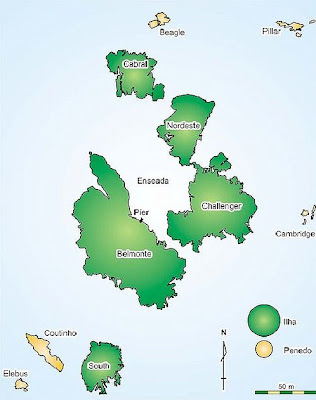 The islands
Only one island, called Belmonte, is inhabited by common islets and contains some type of vegetation. The relay of specialized professionals is made through the work program of the Archipelago of São Pedro and São Paulo (Programa Arquipélago de São Pedro e São Paulo - Proarquipelago), whose maintenance is coordinated by the Interministerial Commission for Sea Resources (Comissão Interministerial para os Recursos do Mar - CIRM), linked to the federal government 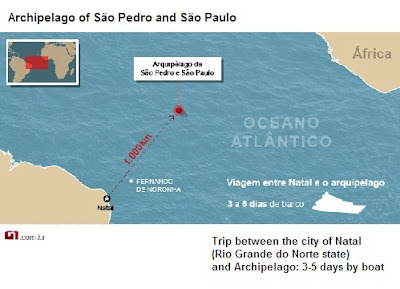 The archipelago of St. Peter and St. Paul (São Pedro and São Paulo) is located in a central region of the equatorial Atlantic Ocean. It is composed of five islands and numerous cliffs. The islands are: Belmont - the largest, Challenger, Northeast, Cabral and South. The archipelago's territory belongs to the Brazilian state of Pernambuco
SOURCE: CARVALHO, Eduardo. Golfinhos acompanham navio da Marinha em viagem a ilhas isoladas,
G1 text. Video accessed in Youtube (11/03/2012), belonged and made by Globo Amazônia/Rede Globo de Televisão
[http://g1.globo.com/natureza/noticia/2012/03/golfinhos-acompanham-navio-da-marinha-em-viagem-ilhas-isoladas.html]