New archaeological site discovered at the coast of Brazil 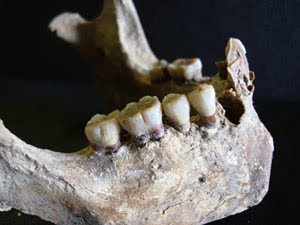 BRAZIL, Sao Paulo's state. At "Ilhabela", (Beautiful Island) - an archipelago and city situated 4 miles off the coast of São Paulo state in Brazil, the coodinator of the Projeto de Gestão e Diagnóstico do Patrimônio Arqueológico de Ilhabela (Project Management and Diagnosis of the Archaeological Heritage of Ilhabela - GEDAI), maintained by the Instituto Histórico, Geográfico e Arqueológico da the Secretaria Municipal de Cultura (History, Geography and Archaeology Institute of the Municipal Culture), the archaeologist Mrs. Cintia Bendazzoli discovered an impotant mortuary archaeological site. The excavation was done on an emergency basis because of the imminent destruction of the material.
The place that was named "Toca da Caveira" (something like Hole of Skull or "Skull Burrow") had human skeletal remains, and funerary accompaniments like clay pot and stone tool, revealing a complex Indigenous funerary ritual. At the same time another two more sites were identified how belonging to the pré-colonizations epoch, but these - still have not been subjected to more detailed research
According Mrs. Bendazolli, the laboratory work performed with the findings revealed that the discover is a collective tomb. There were found remains of at least five different individuals, four adults and a child, this should be about five years of age in the occasion of its death.
None of the skeletons was complete, and according to the research, the absence of many bone units can be resulted of previous interference or violation that can have occurred on the site or - even - something tipical of the funerary ritual practiced by natives.
What caught the attention of the archaeologist was that the collective burial does not appear to be related to the known occupation of the sambaquis indigenous (builders middens or "shell-mountains" builders) - what occurred in Ilhabela occurred around 2000 years ago.
Early research showed that the ritual took place at Skull Burrow was prepared by a potter of the indigenous tribe named Macro-Ge - in more recent times, but before contact with the colonizer.
The presence of ceramic Ge as part of funerary objects placed next to the skeletons, as well the evidences in the bones and teeth indicates that these people was - mainly potters and not fishers and collectors like were the sambaquis. The next step of the investigation will be to conduct carbon-14 dating, which can help elucidate the issues raised by the laboratory studies.
If after the studies if conclude that the founds are, in fact, of a more recent population of potters, this site may be considered a great find, not only for the city, but for the coast of São Paulo as a whole, since it did not exist, until then, evidences that the Macro-Ge indigenous nation, one time, occupied this area of the coast, and were able to practice techniques of navigation and that they arrived to such distances from the coast of São Paulo, says archaeologist.
Anyway, this new archaeological discovery comes to show that the island of Ilhabela was far from a land uninhabited before the conquest of the Portugueses. The large number of archaeological sites recorded by the GEDAI Project and the numerous studies that have following these findings point to an intense settlement of this region and the increasing need to protect this heritage.
SOURCE: Ilhabela: Arqueólogos encontram novo sítio na Ilha dos Búzios com inédita presença indígena
Agora Vale, published in 29/02/2012
[http://www.agoravale.com.br/agoravale/noticias.asp?id=35629&cod=1]