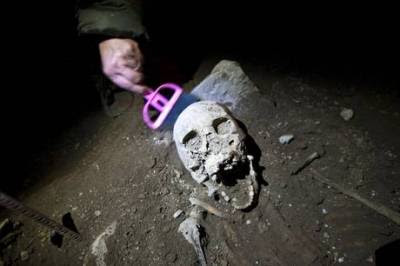 Skull found in the necropolis, square Ostiense, Rome - Italy.
ITALY. March 5, 2012. Next to the pyramid Cestia (Pyramid of Caius Cestius or Gaius Cestius* - in Ostience Square) in Rome during the excavations for the installation of a line of urban electric trains, were found an archaeological site. Among the discoveries were found objects such as bones, skulls, pieces of amphorae and also tombs. One of the skeletons that appeared was almost intact with his arms crossed resting on a slab that was, probably, his own grave 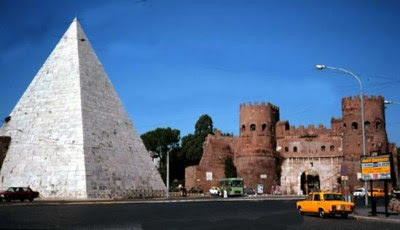 The works were suspended and the place, isolated. The relics are being cataloged and placed in plastic boxes. According to preliminary estimates, the remains were dated between the first and second centuries AD. Archaeologists believe they have found a small cemetery.
* Gaius Cestius Epulo or Gaius Cestius Gallo lived in the first century AD. The pyramid, monument of ancient Rome, near the port of Sao Paulo, was built between 18 and 12 BC, to serve as a tomb for Gaius Cestius Epulo, Roman magistrate.
SOURCE: Crani ed anfore, a Roma spunta una necropoli
ANSA/It, published in 10/03/2012
[http://www.ansa.it/web/notizie/photostory/primopiano/2012/03/10/visualizza_new.html_130116941.html]