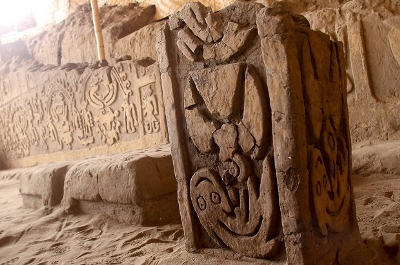 In the tomb, located in the complex-Chotuna Chornancap, were
found 120 objects including ornaments made of gold, silver and
copper. Archaeologists believe the remains belong to Cetemi,
thewife of Naylamp - the mythical hero of a pre-Columbian nation
of Peru. MORE PHOTOS: RPPRELATED LINKSPeru rewrites history books once more with ancient archaeological findNaylamp’s temple discovered in Lambayeque.
The Legend of Naylamp

PERU. In October, last year (2011), archaeologists from the National Museum of Archaeology and Anthropology "Enrique Bruning" (Museo Nacional de Arqueología y Antropología) of the region Lambayeque made ​​an extraordinary discovery. They found a grave with 120 objects, including ornaments and emblems made ​​of gold, silver and copper as well as 116 pieces of pottery.
In principle, the scientists did think that they had found only one more of the leaders of the Lambayeque culture, which according to oral tradition was founded by the legendary Naylamp, but after excavations patients were surprised to perceive that the remains were not of a man but of a woman.
Then, they remembered that, according to oral tradition, the Huaca Chornancap was dedicated to the wife of Naylamp, Cetemy. Now, many already assume that the found may belong to this legendary woman.
However, archaeologists are cautious. They want to investigate further to give a definitive opinion. They expect to complete the laboratory testing. If confirmed the age of the remains, it means that the bones have about 1.250 years, which reinforces the theory of identity Cetemi.
In this case, is necessary a review of the conceptual approach of Lambayeque culture. Until then, it was considered that at that time and in the midst of this people, only the men that exercised political and religious powers received the funeral honors consistent, in function - with the importance of social position they occupied.
But the finding of a woman buried with the pomp of a queen, along with valuables, can demonstrate that the feminine sex could posses more social relevance than was previously supposed. 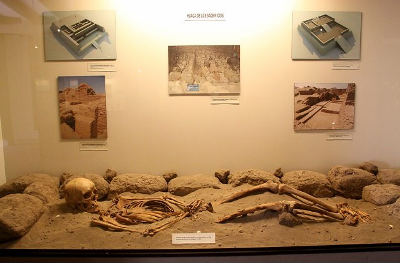 THE ARCHAEOLOGICAL COMPLEX
OF THE CHOTUNA - CHORNANCAP
The Huaca* de Chomancap is located 10 km west of Lambayeque**. It is a platform made of mud bricks. It has 70 meters long, 50 wide, 25 tall and is surrounded by 21 acres of building infrastructure that would have been audience saloons, warehouses, workshops, homes and cemeteries.
Archaeologists, on the basis of popular traditions and previous evidence, they say that in this place, called Huaca, is located the Palace of Cetemi. With base in this information, is assumed that her tomb could be there. The identification of body found will can - finally - confirm the legend which thus becomes part of the history.
* HUACA. Sacred place in the pre-colombian peruvian culture

** LAMBAYEQUE. Yampellec or Lampalliqi. One of the 24 departments of
Peru located northwest of the country. Includes coastal and Andean regions.