The Morning Glory Cloud of Uruguay 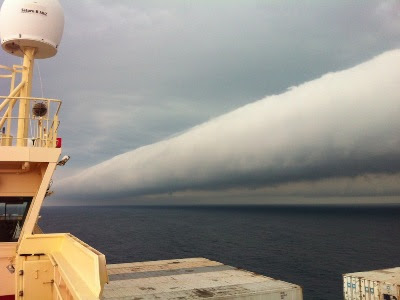 URUGUAY. A photograph taken on the coast of Uruguay captures the beauty of an elongated tubular cloud (cloud roll in English). The phenomenon that is known as "tubular" or familiar arcus, are formed at low altitudes.
The cold air - that stay concentred on a down level of the atmosphere - this mass, passing by a condensation process - that results of a confront with another chain of hot air - suffer this kind of transformation - in its shape. The mass of air became a long, curve and horizontal line, a tube.
The image of this cloud was taken by Captain Andreas M. Cervo Wurff on the way to Paranagua, Brazil, Montevideo, capital of Uruguay. One of the famous places where is possible to observe these clouds is Quennsland, Australia, where they are called the clouds of the "morning glory".