The mysterious civilization of the Peruvian Amazon (more informations) 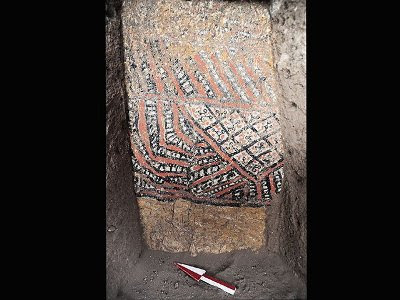 According to archaeologist Quirino Olivera Núñez:
This civilization had knowledge of geometry,
developed a social organization elaborated enough
to coordinate collective public works.
See + photos of the archeological in the RPP website
PERUVIAN AMAZON. For over two Centuries of archaeological science, the existence of some kind of advanced civilization - Non-Neolithic - in the Amazon region was ignored and - even - rejected. However, the recent discovery of an archaeological site with unique features in the Peruvian jungle requires a complete review by the researchers. The idea of an untouched ​​forest that has always been Inhabited only by primitive tribes incapable of any more elaborate work, can not more be sustained.
There some time, deforested areas of northern Latin America, especially in the Brazilian state of Acre, began to reveal drawn geometric formations traced in soil : the geoglyphs. But that was not enough to advance the discovery of truth. Recently, step forward changed - in definite - the idea of a virgin amazonian jungle.
Archaeologists found the structure of a temple has 3.200 years of age with a configuration that reveals the remote existence of an ancient nation - people who had lived there and had a knowledge far beyond what was observed among the indigenous primitive, simple hunters and gatherers.
The archaeological site is broad: it includes four provinces of the Amazon region: Bagua, Utcubamba, San Ignacio and Jaen. Reaches the territory of two countries, Peru and Ecuador. The project, therefore, is binational and was authorized by General Direction of Cultural Heritage (Direção Geral do Património Cultural).
The temple has columns distant among themselves at a precise distance of 1.40 meters. It means evidence of a mathematical knowledge, of measures of space and practices of collective work.
The building is of old masonry made ​​of clay and straw, as many of the buildings of antiquity found in the Middle East and Mesopotamia, for example. The construction is decorated with colorful murals where they find themselves represented human figures and abstract themes, as combinations of horizontal and vertical lines.
The architecture, classified as monumental, shows that its builders had, in fact, a significant degree of technological advancement. According to perquisador Quirino Olivera Núñez, to build such a structure with these dimensions and characteristics, including stone columns - that, it is assumed,were taken from the rivers - such work, would require a large collaborative effort led by highly qualified masters.
This finding implies the existence of a sedentary nation, who must had inhabited the region for many years. In addition, the building that is being discovered and investigated in this moment of the search, is characterized as a ceremonial center, religious - meaning that - these ruins are of a people who developed the idea of ​​religion and ritual worship of gods. A culture more complex of that was conceived by the amazonian tribes - in neolithic level, nomads - known even then.
Quirino Olivera Núñez explains - yet - that: In the areas nearby, we have found some graves. We expect to find a tomb of a great character who may have been the leader of this [mysterious] civilization. Finally, the datation suggests that this society was contemporary of the called civilizations - the nation of the peaks of Chavin and an another of the coastal - Caral.
LINK: CARAL - The Oldest Town in The New World
SOURCE: ROMERO, Edgar. Pinturas halladas en Bagua cambiarán concepto arqueológico en el Perú.
RPP/Peru, publicado em 13/03/2012
[http://www.rpp.com.pe/2012-03-13-pinturas-halladas-en-bagua-cambiaran-concepto-arqueologico-en-el-peru-noticia_460843.html]