Cave paintings of 3,200 years discovered in the Peruvian jungle 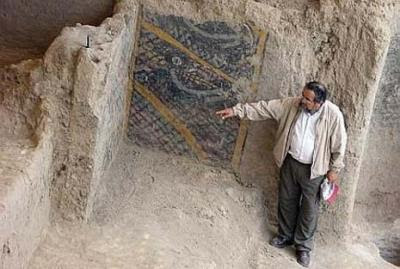 The archaeologist Qurino Olivera - (LaRazón).
This is the unique image released of the
"archaeologica lsite" of "LasJuntas", Peruvian Amazon.
PERUVIAN AMAZON. A team of archaeologists discovered the earliest murals in the Amazon forest in a cerimonial temple of 3200 years, located nearby the city of Bagua in a department of the amazonian Peruvian jungle. The news was published in numerous newspapers of spanish language.
The researchers considered that the finding, which occurred at a place called "Las Juntas", is the first of its kind in all the Amazonian jungle, not only in Peru. The archaeologist Qurino Olivera, head of research, said this is one of the most important discoveries of recent decades. 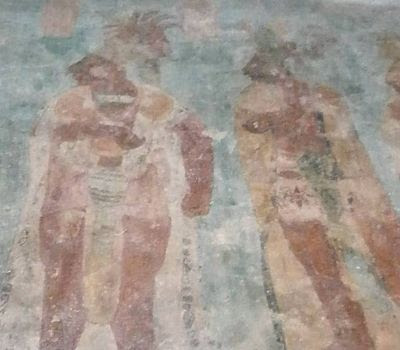 This image: IN INFO341/Argentina but...
THIS IS LOCATED IN MEXICO, according the reader Blakbeard.
He found the source of the image above
in [http://en.wikipedia.org/wiki/Bonampak]
GREAT BLACKBEARD! 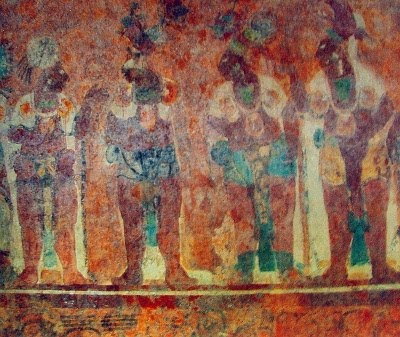 According to the reader Blackbeard the wall to which it relates
this matter is another. This would be the picture correct, above.
It's beautiful but... this painting is also of Bonampak.

The error is of the newspaper (INFO341/Argentina) that put the
matter on the page with a lateral image that does not belongs
to the "archaeological site" mentioned in the text: Las Juntas

Writes Blackbeard:
The wall in this article (INFO341/Argentina)
is from Bonampak, Mexico. And it still provides the source
of the picture and location of the mural that confused me.

[http://en.wikipedia.org/wiki/Bonampak]
Thank YOU! VERY MUCH! Blackbeard. You can see the image above enlarged IN[http://www.wayeb.org/pictures/full/bonampak_002.jpg]
The paintings were discovered on the inside and outside of a temple which has the shape of a rectangle that has a dimension of about 40 square meters. So far, archaeologists have unearthed a wall of 2.20 meters wide and - even - they found several columns.
The predominant colors are red, white, black and yellow. According to experts, the murals are strong evidence that - in the Amazon - existed a civilization that achieved high levels of technological development.
Despite the torrential rains that occur daily in the area, the murals have been preserved because they remained covered by an impermeable layer of rock and clay 15 cm thick that protected the paintings for thousands of years, the researchers said.
The excavations and studies continue in the area with the permission of the Ministry of Culture of Peru and funding of the Regional Government of Amazonas.
SOURCES
DESCUBREN PINTURAS MURALES DE 3.200 AÑOS EN LA SELVA DEL PERU.
Terra/Argentina, published in 12/03/2012
Hallan primeras pinturas murales de la selva amazónica peruana
La Razón, published in 12/03/2012
[http://www.razon.com.mx/spip.php?article114244]
DESCUBREN PINTURAS MURALES EN LA SELVA DEL PERÚ
INFO341/Ar, published in 13/03/2012
[http://www.info341.com.ar/ocio/nota.php?seccion=ocio&id=15795]