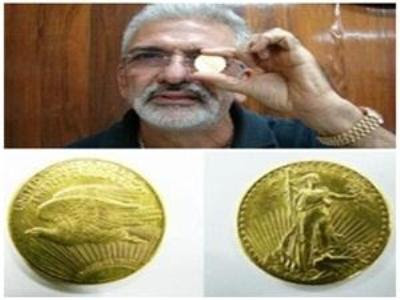 BRAZIL, Piaui's state. February, 02 of march. That day, a Friday, the photographer and businessman piauiense (born in the state of Piaui; in this case, also resident at the same state) Irineu Fernandes, examining your coin collection - which features more than 300 pieces, discovered a rare coin, valued at 13 million reais (about seven and a half million dollars).
The exemplar, of which - it is estimated - there are only 13 others worldwide is known as "Double Eagle". One of those "Double Eagle" currently is on display at Golsmith's Hall in London.
The Double Eagles were first minted in 1850. They are made of California gold. In 1907, the coins received a new design. They stopped being produced em 1933, when President Franklin Roosevelt resolved to abolish at the country the "gold standard" - to save the economy during the Great Repression, 1929. Most of the gold coins of the epoch - then - were melted in order to stem the financial crisis.
SOURCE: Piauiense descobre que moeda de sua coleção vale R$ 13 milhões.
180°, published in 04/03/2011
[http://180graus.com/geral/piauiense-
descobre-que-moeda-de-sua-colecao-vale-r-13-milhoes-501964.html]