MUTANT? The weird griffon of Argentina 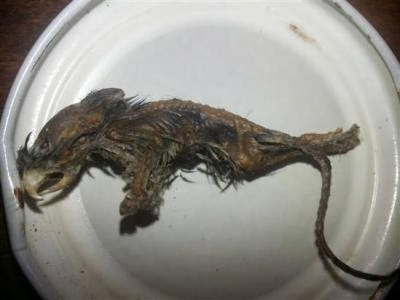 ARGENTINA. In the city of Garuhape, Misiones province, the population was surprised by the finding of the corpse of a weird - a chimeric animal. Half bird, half bird, the creature is being called by the media of Griffin, in reference to the mythological being traditionally described as having bird head, wings and body of a lion.

Measuring just over 23 inches, the 'Griffon was discovered in January (2014). It was hidden beneath a fruit basket in the house of a young student of Genetics - Valeria Machado, from UNAM (Universidad Nacional de Misiones).

Valeria said: At first I thought it was a bird but soon realized (and also her mother) that the creature had the ears. Then, I concluded that it was a newborn rat that could have suffered some kind of mutation.

In other cities of the same province - Misiones - other strange beings, like this Griffin have been found but, even now, have not been studied by scientists.