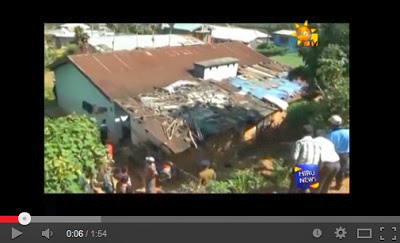 Scientists from Sri Lanka - as the Peradeniya University - are engaged in studying the strange stones - composed of unknown ore - which fell in a populated area in the mountains Regala - Walapane, mountainous region of the country - in the early morning on February 18, 2014 . Professor Athula Senarathna believes the fireball was simply a meteorite.

SRI LANKA. On the morning of February 18, 2014 - a weird and luminous object dropped in Sri Lanka reaching and damaging the roof of a residence along with several utensils that have been impacted with the blow and the heat.

The falling of the object was accompanied by strange phenomena. At the moment the occurrence, residents of Walpane had the vision obfuscated by the very intense shine of a light violet. A strange smell took the atmosphere and scary noises were also reported - described as uterine sounds.

Witnesses, as the owner of the house struck, told that the bolide, already fallen, seemed a living thing. It throbbed, swelled and had spasms, bumps. Gradually, the activity was decreasing until cease completely. 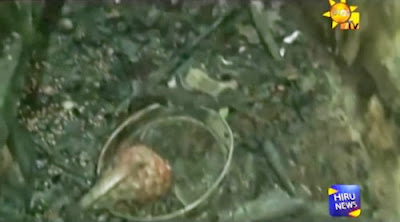 The affected area, around 8 meters² - was completely burned. Inside the house, objects were destroyed, fragmented or - simply - some substances, like food, had evaporated - even when enclosed in small containers.

A team of scientists, led by the head of the department of geology at the Peradeniya University - Professor Jagath Gunasekera, visited the region and reported that samples of the object were sent to India for further analysis.

However, Jagath Gunasekera said that even that material can to be - and probably it is -  remains of a meteorite, a mineral - it is - at first glance - in fact  an unusual material.

Two days after the incident, according to the owner of the house - where the object fell - he was visited by strange people who introduced themselves as employees of a special government service. These people advised him to forget about the case and did not talk more about this issue.