The Strange Creature from Chile 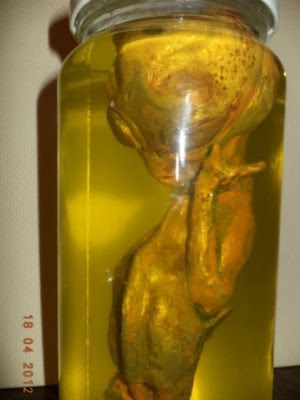 
CHILE. In the region of Los Lagos, in the city of Fresia, province of Osorno, a local resident found a strange creature near of a pasture on fire. The citizen was passing with his motorcycle on the road when he saw the fire and, when he approached, realized that there was a small being that was lied down close to the flames with signs of burns.

Thinking that was very strange the aspect of the creature, collected the body and, coming home, putted the finding in a weak fluid- filled preservative (formalin). Then he reported the fact to his nephew, Gabriel Torres, that told the occurrence and showed photos in a Chilean television program, in a frame dedicated to paranormal phenomena called "Umbrales".

Hugo Mazuela that presents the program commented: In my experience in such cases, a detailed investigation is needed to determine if the creature is a human fetus, animal, or through the realization of a DNA test, verified if it is an extraterrestrial being.

However, a possible origin extraterrestrial of this creature can't be ruled out. Observing the eye shape, for example, we can identify a strong similarity with the type of aliens known like Grays.