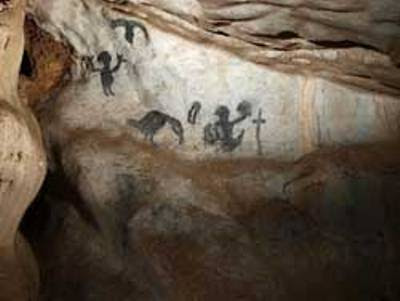 "La Solapa de Los Pintores" (something like Screen of The Painters)
CUBA, Pinar del Rio province. Cuban scientists are researching and cataloging human remains and exemplaries of objects belonged to indigenous funerary practices, pictographs and petroglyphs in the Province of Pinar del Rio. Anthropologists are examining human bones and fragments that have a reddish color - wich were found in a hill situated in the town of Minas de Matahambre, northwest of the island.

The president of the Provincial Commission of Speleology - Mr. Carmenate Hilary, explains that these skeletons - pieces of skulls and other bones painted of red - are typical of the natives who inhabited the archipelago millennia ago
According to historian Jorge Freddy Ramirez, the painted bones are considered as a kind of cult of the dead. This practice was part of a magic and religious ritual related to the way of to confront the phenomenon of death, considered by locals as a moment of transition between two stages of existence.
Previous investigations revealed the presence, in the area - of colonial period relics, but the researchers are looking for burial sites associated to communities of the arquipelago of an epoch much more ancient. A research is just beginning. The discoveries made ​​so far will undergo tests to confirm the antiquity of bones, sex, age and perhaps the cause of death of those people.
Initially, the procedure consisted of undertaker bury the body along with offerings and personal belongings of the dead, as tools and ornaments. Later, at the appropriate time, the bones were exhumed and colorful. Then, a second burial was done in a sacred place. The scholar believes that native Cubans believed that life does not end with the death of the body. (An universal belief)
These indigenous were hunters, fishermen and gatherers of natural resources. These primitive men were called Guanahatabeyes. The language that is called Arawak. Other groups from the same area were known like Taino and Ciboney. All of them inhabited a vast territory where they lived at caves, plains and coastal regions
The caves are of particular interest in this research. To care of this aspect, speleologists are performing expeditions in search of pictographs and petroglyphs that remained occult or unknown in caves and rocks have not yet explored. These records may have been produced - both by indigenous of remote times as by slaves and maroons of the colonial period. 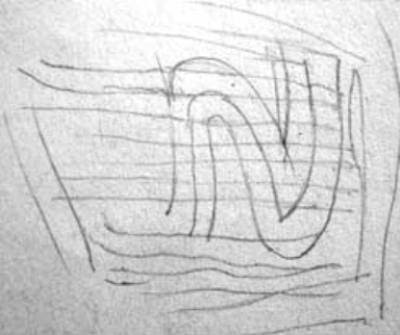 Cueva La Iguana
Once found the exemplars will be reproduced and will be subject to a preservation work to spare them from some deterioration, erosion of rains and winds, exposure to the sun, or even by the irresponsible actions of the laity.
Still at the province Pinar del Rio, in a remote place located there 140 km from Havana (Cuba's capital), have been discovered 40 rock art sites, work of indigenous pre-Columbians. In another region, called "La Solapa de Los Pintores" (something like Screen of The Painters), in an another place known as Minas Matahambre, there are magnificent pictorial murals.
"La Cueva del Cura" is also much known. Located in Viñales, there, are various styles overlap suggesting the presence of two races, two cultures: indigenous and maroon. Some of the figures evoke representations of pilots and birds. The grotto of St. Thomas, equally famous, has one of the greatest collections of rock art of Latin America.There, exist curious signs engraved on a wall stone covered by an soot layer.
SOURCES
HERNÁNDEZ PÉREZ. Pedro Luiz and JIMÉNEZ NUÑES, Antonio. Los petroglifos de la Cueva de La Iguana.
EL Explorador, published in 20/04/2007.
Accessed in 06/02/2012 [http://www.geda.pinarte.cult.cu/el_explorador/especial_nunez/el_explorador_especial4.htm]
MIRELES PILAR, Adalys. Develan huellas de cultura aborigen en Cuba.
Cuba Arqueológica/Prensa Latina, published in 03/03/3012
[http://cubaarqueologica.org/index.php?q=node/329]