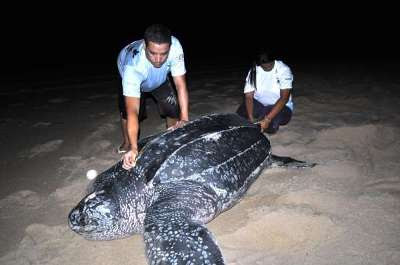 PIAUÍ (state), Brazil – Friday, may, day 13, in the first hours of dawn, a giant turtle was spotted in "Pedra do Sal", a beach located on Parnaíba city, Piauí state's shore.
According the biologists of the "Projeto Tartarugas do Delta" (Delta's Turtles Project), the turtle, measuring 1.6 meters long and 2.4 meters wide, belongs to the specie Leatherback sea-turtle (Dermochelys coriacea). Not were found markings or rings of identification in the body of the animal. It means that this turtle is not monitored by none work related to its specie.
A Leatherback sea-turtle can reach thus 2 meters of lenght and weigh arou 500 to 900 kilograms. The byologist Mr. Mario Neto explain that the Delta Project is monitoring the reproductive period on the region since 2007, between the months from December to July. 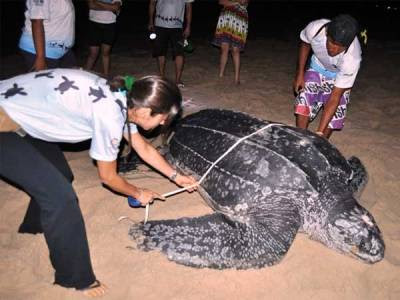 Among all species of sea turtle, the leatherback sea-turtle has a large geographic distribution, but their spawning is restricted to tropical and subtropical areas. In Brazil, was belived that the state of the Espírito Santo (state) was the only place where regular annual spawning could occur. Eventualy, was possible that the spawns, in aleatory way, could happen in other parts of the Brazilian coast.
However, throughout the study, conducted by "Projeto Tartarugas do Delta", belongs to the NGO - "Comissão Ilha Ativa" from 2007, the presence of the leatherback turtle was confirmed in the Piauí shore in all breeding seasons. This species of turtle is one the most threatened with extinction in Brazil.
SOURCE: Tartaruga gigante é encontrada na praia da Pedra do Sal, litoral do PI.
IN 180º Piauí, published in 05/14/2011
[http://180graus.com/geral/tartaruga-gigante-e-encontrada-na-praia-da-pedra-do-sal-litoral-do-pi-426324.html]