"The Amazons": Some facts, some legends 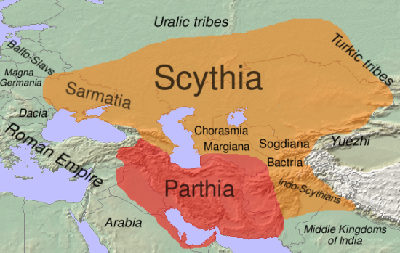 Women indigenous. South-americans female, women warriors, "Amazons" in South America! The historical chronicles about "The Amazons" of the "New World" is often slighted by scholars, because the narratives of travel, many times, seem to be exaggerated or much fanciful.

"Amazons", a tribe, a nation in the tropical jungle, in the equatorial rain florest is an absurd! It known that the myth of "The Amazons" belongs, mainly, to a most ancient mythology: "The Amazons", the tribe of Asia Minor of warriors women was transmited for the Ocident trough by the classical greek mythology. The word "amazon" has greek origin! And returning in timeline even more, a more old origin appears, persian (or "parse") and Shythian (map above) orign: the expression ha-mazan (means warriors women). 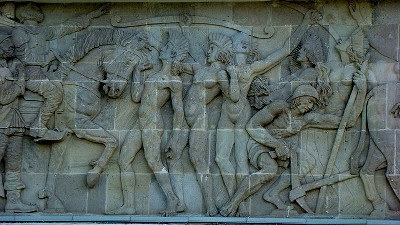 Ludwig Schewennhagen claims that the designation "The Amazons" was used by the "Amerabas" when the historic meeting took place with the fleet of Orellana. He writes: The name "Amazon" refering to the lower basin of the great river, the region between the mouth of the Xingu River and the mouth of the river Parentins is antiga. At the epoch of the arrive of european navigators, the tribe of the Tupinambás already used to call "Amazonas", the region of the lower course of this river... (SCHWENNHAGEN, 1986 - p 37)
Nevertheless, nor the more dazzled or perplex among the cronists that faced the astonishing exuberance of the Amazon rainforest, suggested that the native used the term "Amazonas" to talk about the tribe of women warriors. For the natives of that jungle, these women were "The Ykamyabas" (Icamiabas, that means "women withou husbands"), among other indigenous terms like "coniupuiaras" (konyu-pupyaras, Great Ladies). 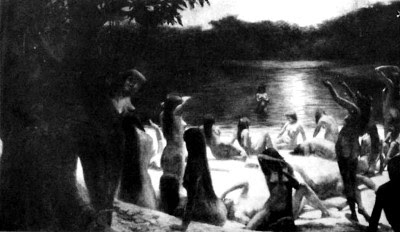 Resistance of the Matriarchy
Leaving by side the sphere of the mythology, considering the traditional knowledge of cultural anthropology, is possible to understand the tribes of warriors women, in different parts of the world like the remaining reality of the archaic matriarchal societies.
In the case of brazilian indigenous nations, oral culture of the people confirms that in a remote past, the tribes were under the matriarchal power. Anthropologists, like Claude Levi Strauss for example, have colected numerous legends that preserve the history of how the men, after a long time beeing dominated by the women, conspired and took political and economic power reversing the social roles. Much possibly, many women don't accepted the new conditions. These, can have created a dissidence in the form of closed female societies .

In "Relation abrégée d'un voyage fait dans l'intérieur de l'Amérique méridionale depuis la côte de la mer du Sud jusqu'aux côtes du Brésil et de la Guyane, en descendant la rivière des Amazones" (1745. Something like: Brief account of a journey to the interior of Brazil from the coast south towards the Guyana, sailing down the Amazon river), Charles-Marie de La Condamine (1701-1774), french scientist and explorer, exposes his theorie about the warriors women of South America. He doesn't need of Atlanteans or Phoenicians to explain which he understand like a natural social phenomenon. La Condamine writes:
...if, in some historic time, could has existed Amazons in the world, this was at America, where wandering life of the wives, coerced to accompany their husbands, often engaged in making war, could make awake the ideia of flee, of to rebel, searching the stability and independence. To flee to the slave condition and beast of cargo. A resolution like this nothing has of extraordinary.
More natural would still be an elite matriarchal refuse submit themself under command of his former lieutenants. Let's meditate...
Sources:
ICAMIABAS.
IN [http://lendasemisteriosdomundo.blogspot.com/2010/06/as-amazonas-icamiabas.html]
REIS E SILVA, Iran. As Amazonas. IN Pantanal News, 02/11/2011.>/br> [http://www.pantanalnews.com.br/contents.php?CID=66202]
SCHWENNHAGEN, Ludwig. Fenícios no Brasil. Rio de Janeiro: Cátedra, 1986.
IN [http://xa.yimg.com/kq/groups/6585607/719953186/name/7389093-Fenicios-No-Brasil-Ludwig-Schwennhagen-PDF.pdf]