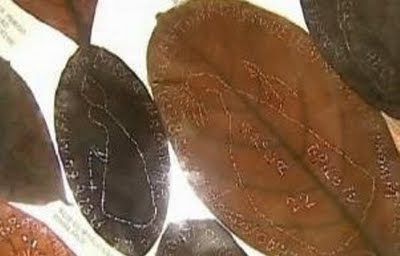 ESPÍRITO SANTO state/Brazil – In Serra city, leafs of trees - by ten years, have presented a strange phenomenon. Inscriptions, religious figures and others appear on the surface of the leafs. The images are like embroideries produced by combination of numerous tiny perfurations. The local population belives that the inscriptions are messages of Our Lady. The house where the tree stays became a pilgrimage place.
The first inscription, appeared sixteen years ago and was found by house owner, Mrs. Maria Aparecida D'Ávila. Since then, the inscriptions don't stop to appear in leafs of all trees of the propriety. A specialist in insect explain that the marks probably were not made by ants.
The expert on insects, Marcelo Teixeira explain: The called "leafcutter ants", like the known "saúvas ants" (Atta), they cut peaces of leafs, like if using scissors. This is not the case. However, many people say they saw ants embroidering the leafs (guided by God). The former residents have moved but an association takes care of the house, which receives thousands of visitors.
During a retirement, drawings, similars to that appear on the leafs but much bigger, appeared on the wall. The Church says that there is no divine or supernatural phenomenon in the leaves, but does not condemn people that want pray at the site.
SOURCE: Imagens em folhas transformam casa em centro de peregrinação, no Espírito Santo.
IN Globo, published in 25/09/2011
[http://oglobo.globo.com/cidades/mat/2011/05/25/imagens-em-folhas-transformam-casa-em-centro-de-peregrinacao-no-espirito-santo-924534677.asp]