The major of historians consider the woman warrior in South America only like a legend, less than a myth or even like mere fantasy of the cronists.
However, some little things in the notes of the explorers make belive that there is a background of strange true behind the legend. The chronicle of Friar Gaspar de Carvajal contains at least two visions of "Amazonas". The witness, source of information of the writer, talks about the clohthes of the women: if in the battle they were naked or almost, in their cities they use tunics of fine wool.
But, what wool is this? The brazilian indigenous, those called "Amerabas", lived naked, or almost, ever. They also did not knowledge the herding. It seems clear that the warrior women of South America don't belonged to same ethnical groups of the others natives of the region. In fact, the witness doesn't could be more clear:

They wear fine clothes made with the wool of the "Peruvian sheep" (alpacas): "Their clothes are like tunics tight down the breasts. On their shoulders and thet they use cloaks that are with cords.

Their long hairs, touch the floor and they have gold crowns on their head, the width of two fingers. Their land is populated by camels (llamas) serving as pack animals. There, exist two saltwater lakes.
Between Bolivia and Peru are notable saltwater lakes as Titicaca, the second largest saltwater lake in the world, located at 3.810 meters of altitude - and the "Poopo" lake.

Amazons of Andes
Researchers from different times have sought to explain the origins of this strange nation of women in South America In 1555, the Franciscan priest and cosmographer, André Thevet (1502-1580, french), published a compilation of texts of various explorers.
About the tribe of "Amazonas", Thevet concluded that possibly were descendants of Amazons Greek that after the Trojan War, had been dispersed around the world. Arriving to South America via North America and Central America, settled themselves in insular territories, in small islands, where they built their cities and underground chambers.

Atlanteans and Phoenicians
Some researchers have supported a history even more old for the great nation of the "Amazons". More ancient that Troy war. Some scholars belive that these women warriors are survivors of a community of the Atlantean civilization that was in a colapse process, and after, much later more, in association with the phoenicians, the women crossed the ocean even reaching the America continent.
Among these scholars figured the austrian professor Ludwig Schewennhagen, whose book "Phoenicians in Brazil: Ancient History of Brazil" is much quoted. Schewennhagen says the arrival of the "Amazonas" at Brazil coincides with the epoch of the Phoenicians arrival, between 1000 and 1200 BC. He also advocates that the name of the great Amazonas river has its origin in this remote time (contradicting the version of spanishes). 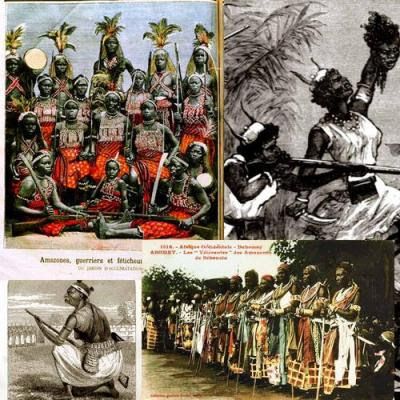 The warriors women of Dahomey, between the sixteenth and nineteenth centuries

The oldest ancestors of women warriors were a nation, member of the immense empire of Humanity and civilization of the Atlanteans. Possibly, the Amazons could had been the last matriarchal society in the context of an advanced culture. Their tribes were scattered across almost the entire known world. Asia Minor, yes, but also in Africa where were known as the warriors women of Dahomey. They were Amazons, because they dominated the riding, they were knights women, and warriors because they had the knowledge the art of war and weapons.
SOURCES:
SCHWENNHAGEN, Ludwig. Fenícios no Brasil. Rio de Janeiro: Cátedra, 1986.
IN [http://xa.yimg.com/kq/groups/6585607/719953186/name/7389093-Fenicios-No-Brasil-Ludwig-Schwennhagen-PDF.pdf]
ICAMIABAS
IN [http://lendasemisteriosdomundo.blogspot.com/2010/06/as-amazonas-icamiabas.html]