ABOUT THE POPOCATEPETL VOLCANO 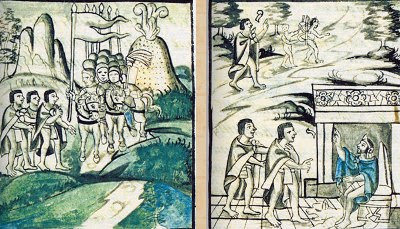 Scenes from the Florentine Codex, Book XII, showing Moctezuma’s envoys meeting the Spanish between the mountains of Iztactépetl and Popocatépetl and reporting back to the Aztec Emperor. IMAGE: MEXICLORE/UK
[http://www.mexicolore.co.uk/aztecs/ask-experts/why-did-moctezuma-think-that-cortes-looked-like-quetzalcoatl]

Also called El Popo or Don Goyo and, yet - Don Greggorio - the Popocatepetl - located between the Mexican states of Puebla and Morelos, is one of the - almost - 1,500 active volcanoes that exist currently in the world (SONG, 2008).

A volcano is considered active if suffered in recent eruption, in the last 10,000 years. With its 5,500 meters above sea level, with 25 km of base perimeter, perennial glaciers crowning the summit of a conical shape symmetrical, the Popocatepetl is the second highest volcano in Mexico.

Approximate age, 730,000 years. His name means "steamy mountain" what fits perfectly in the criteria defining a volcano as active.

In mythological terms, one of the legends of the Popocatepetl - and are some - is abode of the goddess Mayahuel (lady of drunkenness) and of the Patécatl god, lord of medicine, drugs, peyote and root of pulque, with which is produced with an alcoholic beverage, the aguamel (a kind of mead).

These 'gods form a couple, the regents, masters in the cultivation and preparation of agents (vegetable) that produce an altered state of consciousness.

Although to seem to have asleep for a few decades, in the half of the twentieth century, this volcano, from the 1990s, returned to activity that, since then has increased in regularity and intensity. Throughout this period, of just over two decades, in a relationship enigmatic, also have been multiplied the UFO  sightings in the vicinity of that mountain.