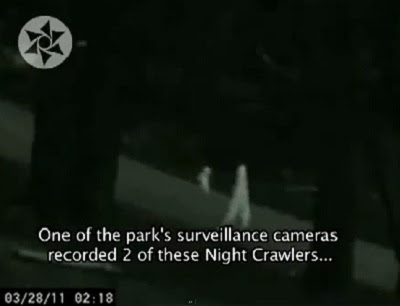 USA. ON 28 MARCH 2011. In San José, in Yosemite National Park - California - security cameras - at least two different occasions - have recorded the movement of strange entities who, although its nature totally unknown, seem to be related to ancient legends of the local tradition.

According to this tradition, such entities are called Night Crawlers (something like the Night Trackers or, simply, The Nocturnals).

The inhabitants of the region describe them as a very tall creatures of humanoid configuration, with head, torso, long legs, but, do not seem to have arms or shoulders.

These entities are extremely respectedof the groves and people express this centenary consideration by building wooden statues (picture below) representing such entities. The statues, that are found from the limits or in the most remote places of the woods. 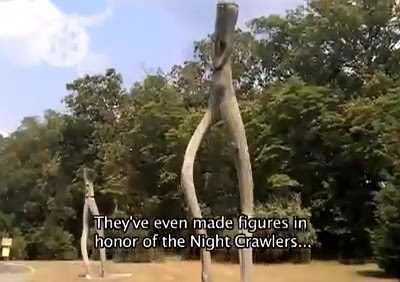 The presence of these beings in those groves  had been already recorded before, in 2007. At that time two of them were filmed - again, by a surveillance nocturne camera. In occasion, they were wandering in the garden of a house (picture below). 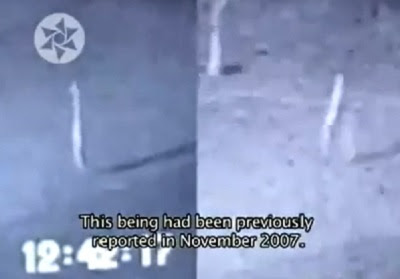 Another curious fact about these creatures refers to its supposed antiquity. While some contemporary scholars estimate the belief in about two centuries (which considering the strength of tradition is an estimate shy) - in 1931, an archaeologist, discovered in desert Blythe, Calif., huge geoglyphs drawn on the ground that, like other similar , can only be seen from above, on board of some type of aircraft. 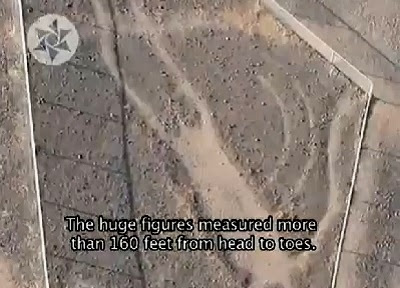 The humanoid figures traced these geoglyphs are extremely similar to the Night Crawlers. The drawings, enormous, reach to measure more than 50 meters from head to toe.

Archaeologists could not get determine the age of these glyphs but references to these creatures appear in the legends, preserved by oral culture more archaic of the north-American Natives.