Coal stains of unknown origin cover the beaches at Asturias 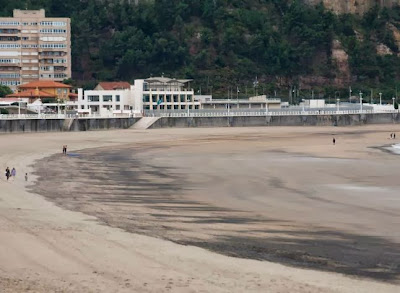 Salinas Beach.  Notable stains of coal that came nobody knows from where, dirtying the  sands. Tourism prejudiced. Photo: Ricardo Sólis.

SPAIN. ASTURIA province/PRINCIPADO DE ASTURIA. At Castrillón city (a consejo - costal zona of Principado de Asturias - Principality of Asturias, province of Asturias), in the parish of Salinas and in a hamlet (a village) named San Juan de Nieva - the beachs are suffering a phenomenon of degeneration.

There some time, has been observed a significative miss of sand, miss of the amount of sand in those beachs. Or be, if this continue, in this way, soon, the beaches of that region will disappear.

For residents of the waterfront, the mystery is the origin of the pollution, from where it's coming this mineral. The Castrillón's Lifeguard service, Ignacio Flores, commented: It's weird because the tides has been soft and no gales. We have not found a cause to explain the deposit of this amount of coal, so quickly, on the sand.

The City of Castrillón should claim to the Ministry of Environment the analysis of deposits from the beach to rule out any environmental problem - say the neighbors. It should be checked if these deposits on beaches are not from ships, that stay waiting to enter the port, highlighted a resident.

The possibility that of material have coming from the ships anchored off the coast castrillonense was rejected by the lifeguard's coordinator. Ignacio Flores ensured that despite dirty ... the beaches are... they are perfectly clean [!?!?]