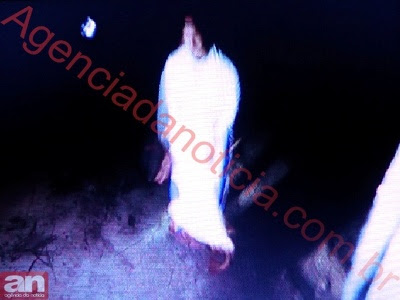 BRAZIL. MATO GROSSO state. WEDNESDAY. August, 28 - 2013. On the banks of Tapirapé river, near Porto Alegre do Norte city and of the Aldeia urubu Branco, dos índios Tapirapés, the spirit image of an indigenous appeared in a photograph (above) obtained by a fisherman that was in the local.

The spiritist medium Justino Xerente, who was with the fisherman that night, has no doubt that the image of the man in white is an indigenous soul. Xerente commented:
We, who work with mediumship, we don't have doubt that a spirit had materialized there in that place, and as incredible as it seems the  photographic  machine was able to capture the image (that  eyes of  the majority persons incarnated, don't can see).

Justino Xerente, which is also from indigenous ethnicity and works with mediumship (communication with spirits)  in a ranch at Porto Alegre do Norte city, also explained that the image depicts a spirit of light and protection:

He is a spirit of protection and light that was in the place protecting us, I felt his presence there and I saw him coming down the river but didn't think that it could appear in the photograph.

Justino said that despite not know exactly who was this spirit, believes to be the spirit of Pajé Laurindo, who died near the town of Luciara with 115 years in 1968. The pajé Laurindo, that also was a shaman, is the father of Justin and helped him, in his childhood, to develop the mediumship.

When alive, the Pajé was consulted by countless people, including politicians. These facts were published in newspapers in 1961. At the time, the shaman was  recognized like being the first spiritualist medium to conduct cancer cures through Spiritist therapy in the central-western region of Brazil.

For scholars of the paranormal, especially for spiritualists Kardecists, this phenomenon - the presence of a spirit to be recorded in a photograph, this is possible because the camera has a sensitivity that the normal human eye does not reach.

The spirit can stay visible with the aid - conscious or not - of the incarnate - that provide a subtle substance with which the spirit obtains the density to assume a visible an appearance. This substance, called ectoplasm, allows the materialization of spirits in different intensities and can even make a entity become  a tangible form.
RELATED LINKS

Friday, December 17, 2010
BRAZIL. MATO GROSSO DO SUL. Ghost in photo I
[http://brazilweirdnews.blogspot.com.br/2010/12/ghost-in-photo-i.html]
OH! This... looks like... me! when I get up from my work's chair after a night writting and searching.