The ghost of Lules's square 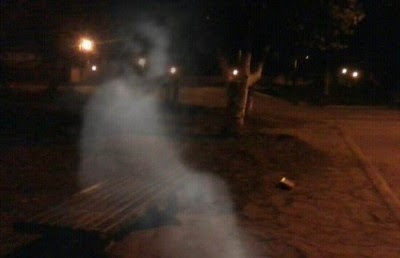 The photo. The ghost in the square photographed by the camera mobile phone of a citizen.

PROVÍNCIA DE TUCUMAN/ARGENTINA. In the city of Lules (or San Isidro de Lules), capital of the eponymous department, Wednesday, September 28 (2012) at 3 o'clock in the morning, in Plazoleta de los Inmigrantes, a citizen, Enzo Guillermo, obtained, with remarkable distinctness, using the camera of your mobile phone, a photograph of a ghost .

The spectrum, the diaphanous white figure of a human being, was sat one of the benches in the square. The picture, posted on the author's profile, on Facebook, raised immediately, numerous comments.

Many, claim that in the place, can beheared strange noises during the early morning. Others remember that, there a few weeks ago, a lady died, an old woman and it is speculated that, therefore, the ghost is a lost soul - which failed to - even - leave the world of living.

THIS NEWS IN PORTUGUESE
[http://sofadasala-noticias.blogspot.com.br/2012/10/o-fantasma-da-praca-de-lules.html]